It's a classic cocktail, the source of many legends. There are at least ten versions around the "invention" of the martini, but it's most likely that this drink developed slowly. The most probable forerunner of the "Martini" was a cocktail called "Martinez", which in turn owes its name to the Californian city of Martinez, where it became popular towards the end of the 19th century. There is even a plaque commemorating the "birth of the Martini" at the intersection of Alhambra Avenue and Masonic Street. Wormwood was already exported to the USA around 1850, but it was not until 1880 that bartenders added it to gin.

There is no exact date of the "first Martini". A "Martinez" was first mentioned in writing in 1884, although Curacao, maraschino (cherry) and orange bitters were added as alternatives. The New York bartender Jerry Thomas is considered the inventor. The name "Martini" was first mentioned in a French bar book in 1888 and "Dry Martini Cocktail" in 1904. In any case, the martini counts among the aperitifs and is today usually mixed from several parts of gin and a smaller part of mostly dry vermouth. However, vodka can also be used instead of the classic gin, but then it must be ordered explicitly as a "vodka martini". If a whisky is added instead of gin, as well as Angostura, then this is a Manhattan. 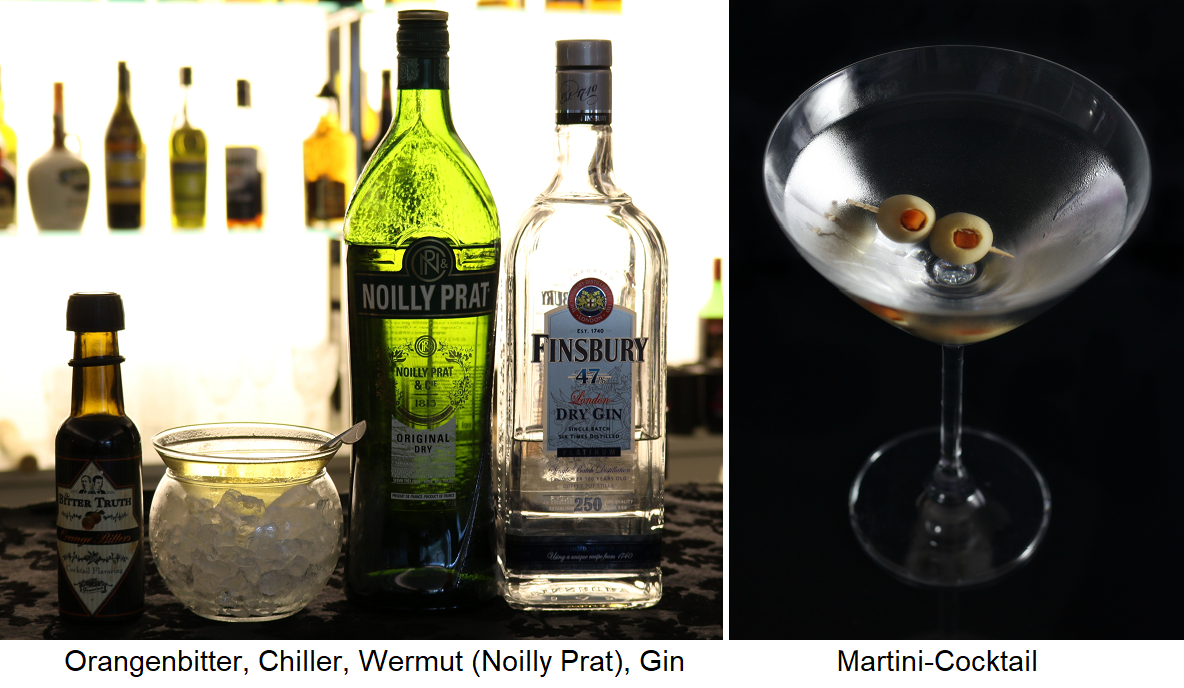 There are different recipes and different opinions as to what the true "classic martini" is. In any case, it should not be confused with the eponymous vermouth of the Italian company Martini & Rossi. In principle, any brand of vermouth is acceptable, but the Italian Martini or the French Noilly Prat are preferred by everyone. Probably the most famous form is the classic "Dry Martini", which consists of London Dry Gin, as little vermouth as possible and an olive or lemon peel as garnish. The "International Bartenders Association" lists the "Dry Martini" among the "Official IBA Cocktails" with the following recipe: 5.5 cl Gin and 1.5 cl Dry Vermouth. Put all the ingredients into a mixing glass with ice cubes, stir well (stirred) and strain into a chilled Martini bowl with the typical conical shape (Straight Up = without ice). Then sprinkle some oil from a piece of lemon peel onto the drink or garnish the glass with an olive. The cocktail glasses are usually pre-cooled (frosted). More rare are special martini chillers, i.e. goblets without stems, which rest after serving in a container previously filled with crushed ice. However, cocktail glasses have mixing ratios of 3:1 to 8:1. An extreme form is to moisten the glass with vermouth only. In the early days of the Martini, a much higher amount of wormwood was common than today.

A hotly debated question is "shaken or stirred". This is because the method of preparation has an influence on taste and appearance. Shaking usually makes the drink colder than stirring, and the ice can dilute it relatively easily. On the other hand, a special optical effect is created: Due to the air that gets into the drink during this process, the liquid appears milky in the glass shortly after pouring and only slowly clears up as the small bubbles rise (which purists call "ugly"). Secret agent James Bond 007 orders his martini in "Casino Royale" as follows A dry martini, shaken not stirred in a champagne goblet. Add three measures of Gordon's (gin), a measure of vodka and half a measure of Kina Lillet. Shake it thoroughly until it is ice-cold and add a thin slice of lemon peel.

So instead of the traditional wormwood, James Bond wishes the wormwood-like wine liqueur Lillet (Kina Lillet). Furthermore, he usually adds gin and vodka. He later calls the cocktail "Vesper" after the first name of a woman he has fallen in love with. Martini fans with a puristic touch accuse the H secret agent Bond (the English author Ian Fleming, who invented him, would probably be better) of being a culture vulture, because a martini has to be prepared exclusively with gin and vermouth, and absolutely "stirred".

The cult drink is surrounded by numerous anedocts as well as more or less legendary reports about events. In 1933, the end of the American prohibition (1920-1933) was celebrated in the White House with martinis. The US writer and war correspondent Ernest Hemingway (1899-1961) accompanied an American advance troop during the reconquest of Paris in 1944. This was celebrated with numerous martinis in the bar of the Hotel Ritz. At the Yalta Conference in February 1945 on the Crimean peninsula with the three Allied heads of state Franklin D. Roosevelt (1882-1945), Winston Churchill (1874-1965) and Josef Stalin (1878-1953), Roosevelt allegedly had a suitcase with bartending equipment with him so that he would not have to do without his beloved "Dirty Martinis" (with a shot of salty olive juice).

A scene in the novel "The high Window" by the US writer Raymond Chandler (1888-1959) shows how a very dry martini can be described. The private detective Philip Marlowe orders a martini in a bar: A martini. Dry. Very, very, very dry. The bartender: OK. Do you want to eat it with a spoon or with a knife and fork? Philip Marlowe: Cut it up into strips. I just want to nibble on it.