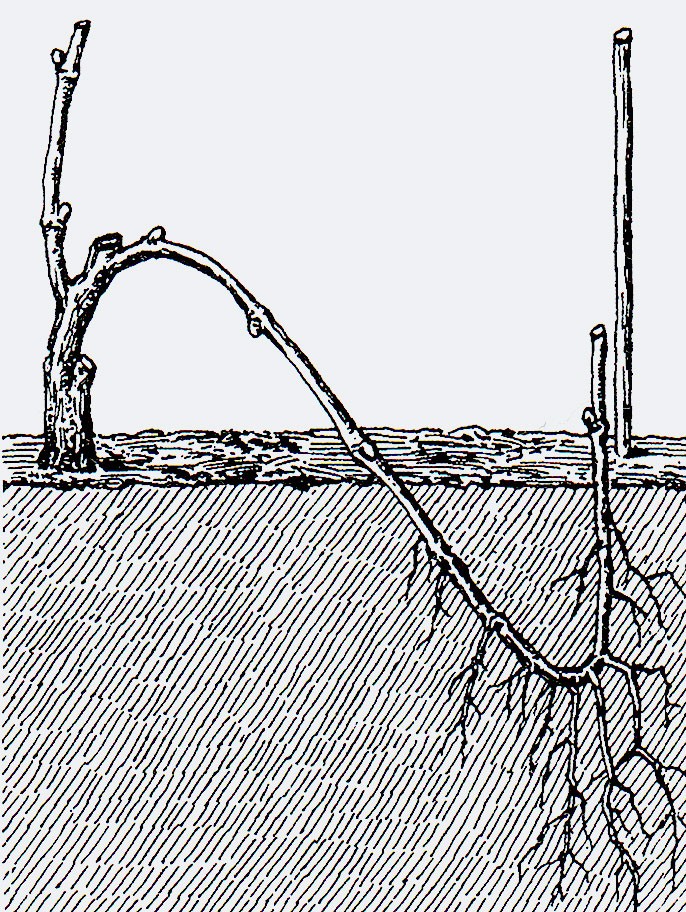 A term used to describe the propagation result of vines (or other plants) and/or the shoots that have previously been buried in the soil. Synonyms are turn-off, offshoot, depositor, fanling, newbie, dog, marble, newcomer, nickling and tail vine. The ancient method was already described by the Roman wine author Columella (1st century AD). Before the phylloxera plague, this was a common form of vegetative propagation of vines, especially in dry areas. A long vine shoot is lowered to the ground and buried at normal planting depth. The tip is bent up and led upwards again. This practice is also known as bending, thimbling or marcottage (French: marcottage). The result is a genetically 100% identical vine (a clone), which remains connected to the mother plant until it has taken root and established itself in its new location.

The advantage of this method is that young vines are supplied by the deeper-rooted mother vine even during summer drought and the establishment success is much higher compared to cuttings. The disadvantage is that the radius is very limited due to the length of the rods and cannot be used for new plantings. But it is well suited for gap planting or for rejuvenating overaged vines in a stand. However (assuming that the mother vine was grafted) the phylloxera resistance is lost, because the new vine is rootless. Grafting is therefore necessary.

Complete lists of the numerous vinification measures or cellar techniques, as well as the various types of wine, sparkling wine and distillate regulated by wine law are included under the heading "Vinification". Comprehensive information on wine law can be found under the keyword wine law.