The "royal river" (Breton Liger) covers a distance of 1,000 kilometres from the Massif Central in southern central France to the mouth of the Atlantic Ocean. It gave the name to this huge wine-growing region with its 70,000 hectares of vineyards. Like all waters, it exerts a positive effect on viticulture or creates the conditions for it by forming valley slopes. The Loire has its source south of Lyon, flows first in an arc to the north and then turns west near Orléans. It crosses twelve départements and takes in a total of ten tributaries. There is significant viticulture on both banks of the Loire over a distance of around 400 kilometres, with the vineyards being divided up into many areas.

The Romans were already planting vines here at the turn of the century. Already in the 11th century the wines of the Loire were popular in England and Holland and were imported in large quantities. In the 12th century the Cistercians planted a vineyard near Savennières, the famous Coulée-de-Serrant site. On the banks of the Loire, the French kings and many nobles built splendid hunting lodges and castles; there are a total of over 400 chateaux along the Loire and its tributaries. The most beautiful ones date from the Renaissance under King Francis I (1494-1547). He brought Leonardo da Vinci (1452-1519) to his court, who lived in Château Clos Lucé (not far from Château Amboise) until his death. The canonized Jeanne d`Arc (1412-1431) first met with King Charles VII at Chinon. (1403-1461) to motivate him to fight against England. In 2000, UNESCO declared the "Val de Loire" (Loire Valley) a World Heritage Site.

Due to its size, the region has climatic conditions ranging from continental in the Massif Central to Atlantic at the Loire estuary by the sea. In combination with the different soil conditions, this results in a wide variety of wine types. And yet these have in common fresh acidity, fruitiness and delicacy of aromas, which is due to the northern location of most appellations. The region is primarily a white wine region. The two main varieties Sauvignon Blanc and Chenin Blanc (here called Pineau de la Loire) produce dry to noble sweet wines. Above all, the sparkling wines are famous, the Saumur area developed into the second sparkling wine centre of France after Champagne. The most important red grape varieties are Cabernet Franc (Breton), Gamay, Malbec (Cot) and Grolleau. These are used to make rosé wines, vins gris and fruity red wines, most of which are intended for quick consumption. 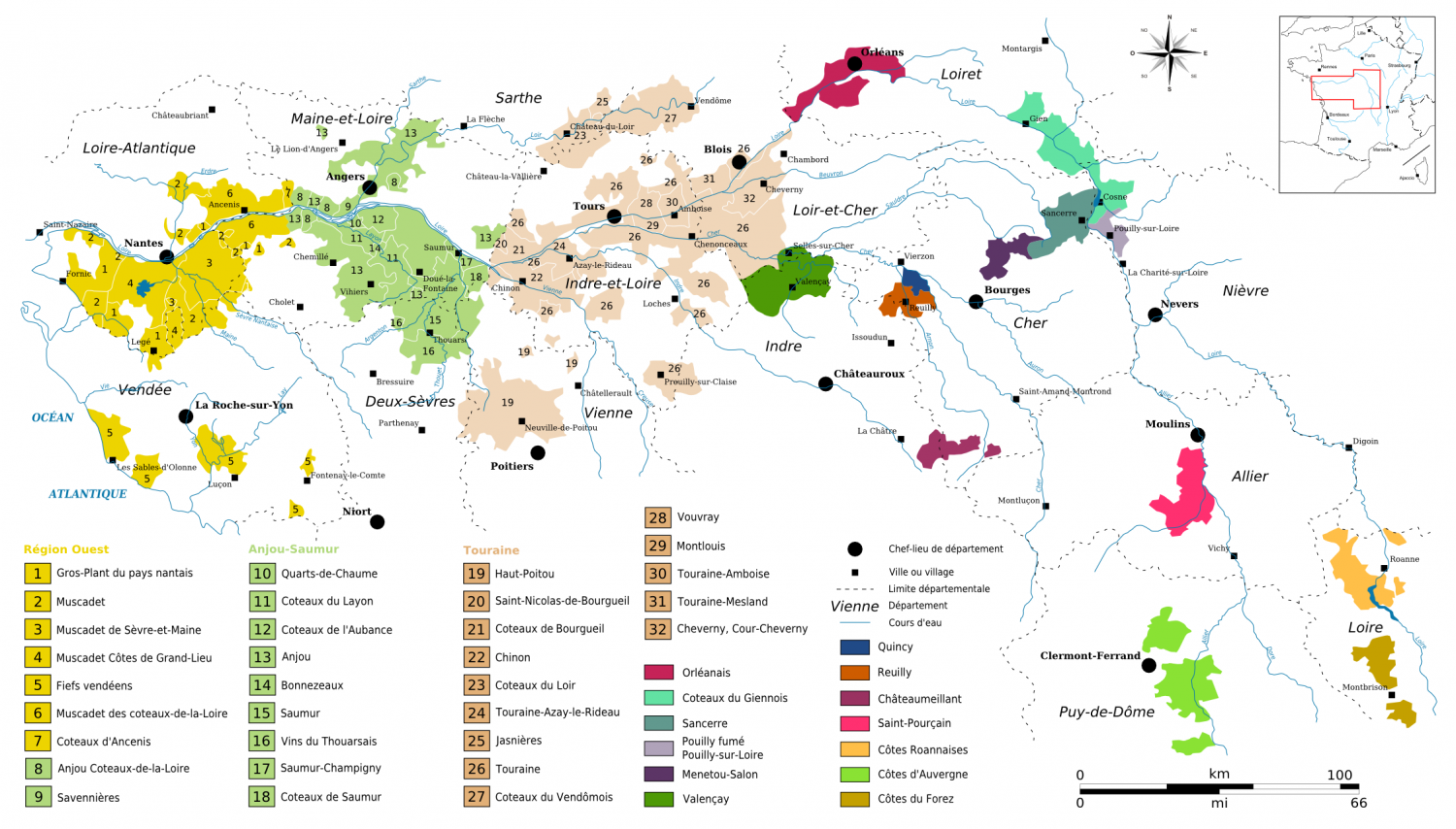 For reasons of clarity, the large Loire region can be divided into four sections from west to east. In the west at the Atlantic coast at the lower course of the Loire, around the city of Nantes there is the large area Pays Nantais with the Muscadet white wines produced according to the Sur lie method. The second section is the Anjou-Saumur area with numerous enclaves. The third section is dominated by the Touraine area, also with numerous island appellations. The fourth section, in the historic province and former duchy of Berry in central France, is clearly demarcated from the other three sections and is located at the southernmost point. To the east is the wine-growing region of Burgundy or Beaujolais. The most important appellations: