The headquarters of today's "Rotkäppchen-Mumm Sektkellereien GmbH" is located in the city of Freyburg in the German Saale-Unstrut growing region. Its origins date back to 1856, when a wine shop was founded by the brothers Moritz (+1863) and Julius Kloss (+1890) and their friend Carl Foerster (+1888). One year later they participated in the "Freyburger Champagner-Fabrik-Gesellschaft". From 1861 onwards, a sparkling wine was produced under the brand name "Monopol". But already in 1862 the company had to be liquidated. In 1866, the majority of the estate was acquired by the "Kloss & Foerster" sparkling wine cellars with the three gentlemen mentioned above as partners. Business was now going better and better, so that the musts and wines from the Moselle, Main and Rhine, and later even from Champagne, were bought. The French champagne company Heidsieck Monopole protested successfully against the brand name in 1894. Kloss & Foerster were no longer allowed to use "Monopol" and introduced the name "Rotkäppchen" (then still with an "h") after the red bottle cap and the still permitted designation "Champagne" on the label. In 1891 the five-storey "Great Cellar" and a new office and reception building were built, which still form the heart of the sparkling wine house in Freyburg today.

In 1896, the completion of a giant cask with a volume of 120,000 litres of wine, built in the in-house cooperage from the wood of 25 oak trees, was celebrated. In 1903, Kaiser Wilhelm II (1859-1941) praised the digestibility of the sparkling wine on the occasion of an "imperial manoeuvre" carried out near Freyburg and boasted that he had introduced the Rotkäppchen sparkling wine in many German officers' casinos while still Crown Prince. One year earlier, the Emperor had introduced the sparkling wine tax to finance the imperial fleet. In 1906 the 50th anniversary was celebrated. In the following decades there were business ups and downs, but the company also survived the world economic crisis of 1929 and the two world wars.

In 1948, the property was expropriated and the business became "public property". The founder's grandson Günter Kloss went to the West and refounded the "Sektkellerei Kloss & Foerster" in Rüdesheim in 1952. The current "VEB Rotkäppchen Sektkellerei Freyburg" became a model GDR company. Innovative products such as "Mocca-Sekt" and "Sekt-Pils" were created and 38 brands of sparkling wine were produced in the 1980s. After reunification in 1989, West German competition led to a sales crisis and sales dropped to one tenth.

In 1993, after long preparatory work, the company was privatised through a management buy-out. Sixty percent of the shares went to the managing director Gunter Heise and other members of the management. Forty percent of the shares are held by the traditional West German company Eckes-Chantré. This marked the beginning of a new brand success story. Sales increase rapidly and the company expands. In 2001, the German Sparkling Wine Division was bought by Multi Seagram, which also acquired the three brands Mumm (German company, not to be confused with the French company of the same name), Jules-Mumm and MM (Matheus Müller). Since then, the company has operated under the name "Rotkäppchen-Mumm Sektkellereien GmbH", the ownership structure remained the same. This year Rotkäppchen became the best-selling sparkling wine brand in Germany.

Finally, the "Privatsektkellerei Geldermann" was also taken over in 2003 (see Deutz). And as the crowning glory, the company returned to its origins in 2005 with the purchase of the sparkling wine brand "Kloss & Foerster". This created the largest German sparkling wine house with a market share of over a quarter. More than 300 employees work on producing sparkling wine at the four traditional locations Breisach, Eltville, Freyburg and Hochheim. Since the year 2000, Little Red Riding Hood sparkling wine has also been produced and marketed in China under the brand name "Xiao Hong Mao" ("little red cap") in two flavours.

The company entered the wine segment with the Rotkäppchen quality wines introduced in 2006 and the Collection de Chantré acquired in 2007. The same year also saw the acquisition of West German Eckes-Spirituosen- und Wein GmbH. Finally, the well-known Blanchet branded wine line was purchased from Racke in October 2009. This made the company a leading European beverage group. Including Blanchet, a total volume of 16.5 million bottles was achieved. In 2009, 157 million bottles of sparkling wine were marketed (with Rotkäppchen accounting for the main share of almost 100 million). Sparkling wine, spirits and wine produced a total of 212 million bottles with a total turnover of 780 million euros. See also under largest wine companies in the world. 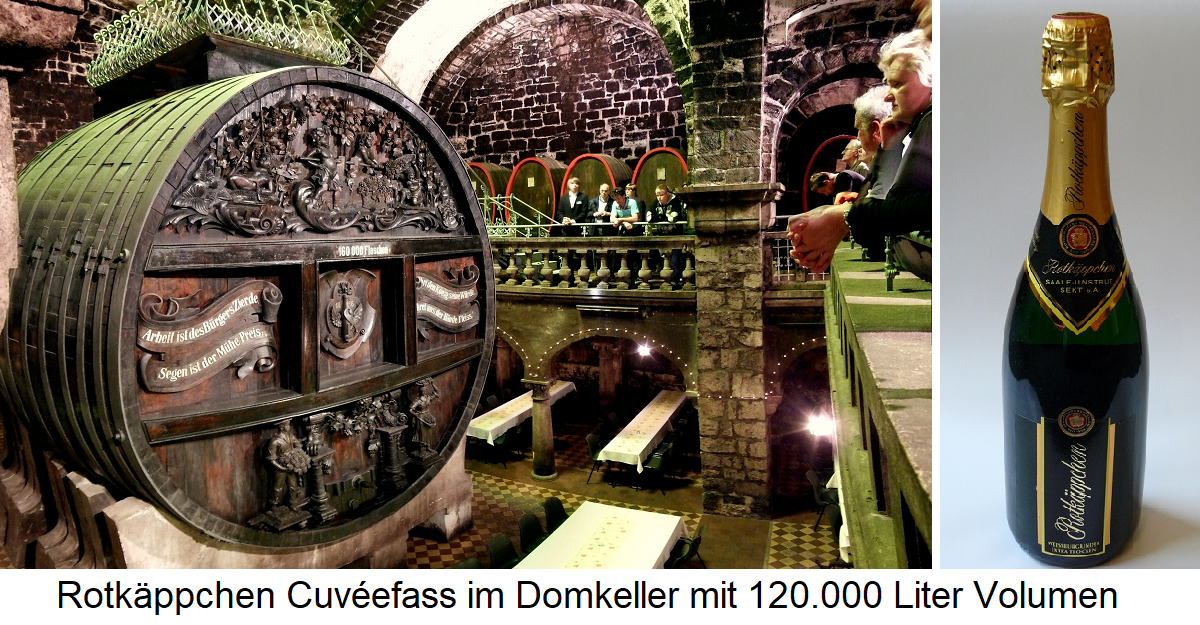 Informations about "Rotkäppchen Sektkellerei GmbH" in wein.plus Wine Guide
This page was last modified at 21 July, 2020 at 04:20.