Greek name for Grande Reserve; see under Greece for the quality levels.

The history of Greek viticulture began, so to speak, with a fling between the supreme god Zeus and the beautiful Seméle (daughter of Harmonia, goddess of harmony), which led to the birth of Dionysus, the god of wine, joy, grapes, fertility and ecstasy. Ancient Greece or, based on archaeological finds, especially the island of Crete, is considered one of the "cradles of European wine culture". Wine was already cultivated in the Mycenaean culture in the 16th century BC (Mycenae = north-eastern Peloponnese), as indicated by amphorae that have been found. Wine was an important part of the drinking culture of daily life. The Greeks were among the very first to attach great importance to wine as a valuable commodity. Even the poet Homer (8th century BC) reports in the Iliad about wine as the household drink of the heroes described. The historian Hesiod (~750-680 BC), the philosopher Aristotle (384-322 BC), the naturalist Theophrastus (370-287 BC) and the physician Galen (129-216) also dealt with wine and viticulture.

On their colonising campaigns in the Mediterranean, the Greeks brought their grapevine and wine-growing culture to Sicily, to southern Italy known as Oinotria, to southern France and to the Black Sea. Many methods were adopted by the Celts and Romans. The Roman poet Vergil described the diversity of grape varieties: "It would be easier to count the grains of sand in Greece than the different grape varieties." The famous port of Monemvasia on the Peloponnese peninsula was a widely used transhipment point for sweet wines from the Aegean in the late Middle Ages under the rule of Venice, which were shipped from here to many countries in Europe. From the 15th to the middle of the 19th century, the Ottomans ruled the country, during which time wine lost its importance due to the Muslim ban on alcohol, only continuing on a relatively small scale on most of the islands. Therefore, some knowledge was preserved.

It was not until long after the country gained independence in 1830 and the Turkish influence was pushed back that people in Greece began to deal professionally with viticulture as an economic factor again and reactivated numerous vineyards at great expense. Among the pioneers were also some Germans, such as Gustav Clauss, who founded the huge Achaia Clauss winery in 1861, which still exists today. By the end of the 19th century, the area under vines had doubled, but when phylloxera finally reached Greece in 1898, much was ruined again. Reconstruction was relatively slow, because in the meantime the demand for Greek wine had also fallen sharply. Greek viticulture only experienced a renaissance with the end of the military dictatorship in 1974 and Greece's accession to the European Union in 1981.

Despite its strongly maritime character, Greece has a very high proportion of mountains. The soils of limestone, granite and volcanic rock and the prevailing Mediterranean climate with short humid mild winters and dry hot summers have a favourable effect on viticulture. The often dry autumns produce mostly fully ripe grapes with relatively little acidity. Most of the wine-growing areas are located near the coast with moderating sea breezes. To give the wines more structure, vineyards are deliberately planted at high altitudes. The vines can build up more extract and reach higher acidity levels due to the extended vegetation cycle. Another effective method of slowing down the ripening full stop is to deliberately plant vineyards on north-facing slopes.

Viticulture is practised, often on a small scale on a few hectares, throughout Greece on the mainland and also all the major islands. The appellations (POP, formerly OPAP and OPE) are marked in red: 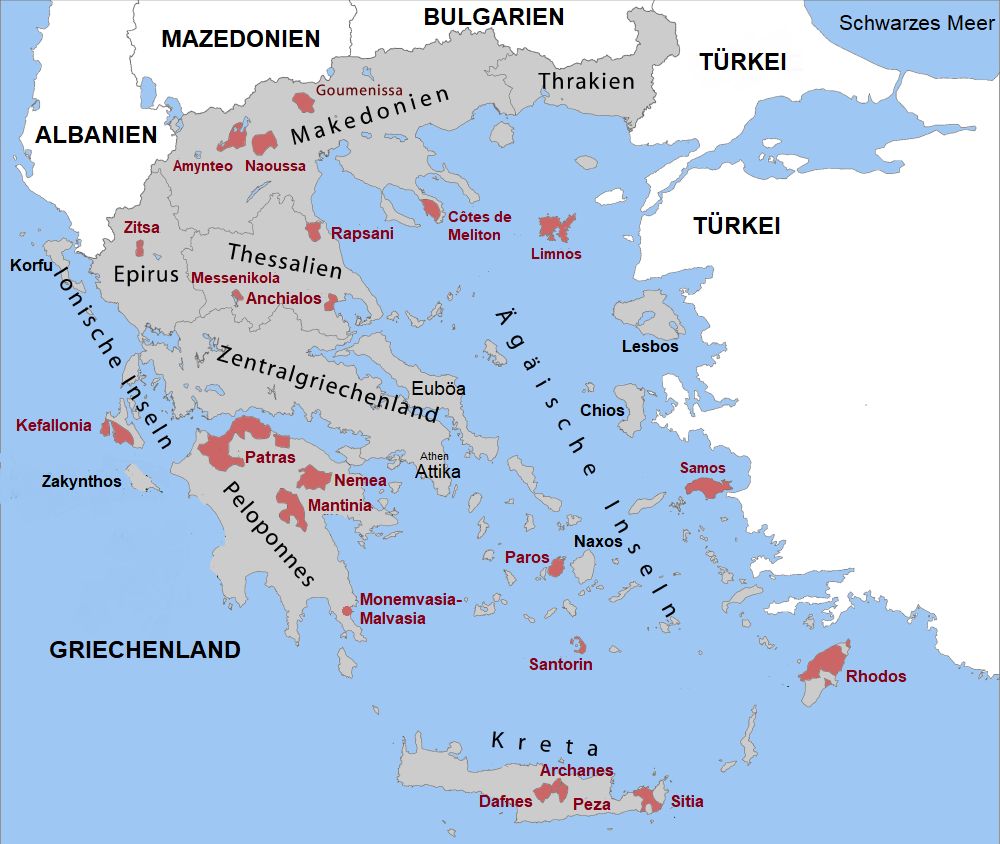 In 2012, the area under vines covered 110,000 hectares with a downward trend (in 2000 it was 131,000 hectares). Of this, 3.115 million hectolitres of wine were produced (see also under wine production volumes). There are about 300 different autochthonous grape varieties, which account for 85% of the area. Only in a few cases are foreign varieties permitted in the quality wines. Large quantities of table grapes and sultanas are also produced; the most important variety for this is Korinthiaki. Even today, viticulture is characterised by original flavours. Around 60% are high-alcohol white wines. 90% of the wines are vinified dry. The grape variety index 2010 (statistics Kym Anderson):