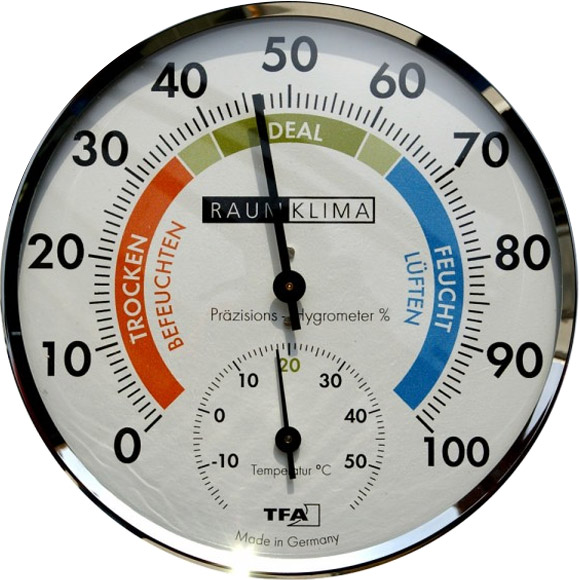 Term (also air humidity) for the proportion of water vapour in the gas mixture of the earth's atmosphere or in rooms. Liquid water such as raindrops, fog droplets, ice or snow crystals are not included. Humidity is one of the many factors in weather or in the long-term course of the climate. From the free surfaces of water bodies (rivers, lakes, oceans), individual water molecules always transfer from the water volume to the air volume. Absolute humidity is the gaseous water vapour contained in one cubic metre of air, usually expressed in g/m3.

The most frequently used measure, however, is relative humidity (rLH), which is the ratio of the actual amount of water vapour contained in the air to the maximum possible amount, measured in %. However, the air can only absorb a limited amount of water vapour. The warmer the air, the higher this saturation amount: at 40 °Celsius 50 g, at 65 °Celsius 200 g and at 100 °Celsius 600 g. When the saturation level is exceeded, condensation forms tiny water droplets in the form of mist, as well as dew on surfaces close to the ground. Air humidity is an important parameter for meteorological processes. A relative humidity between 55 and 65% is optimal for humans, animals and most plants.