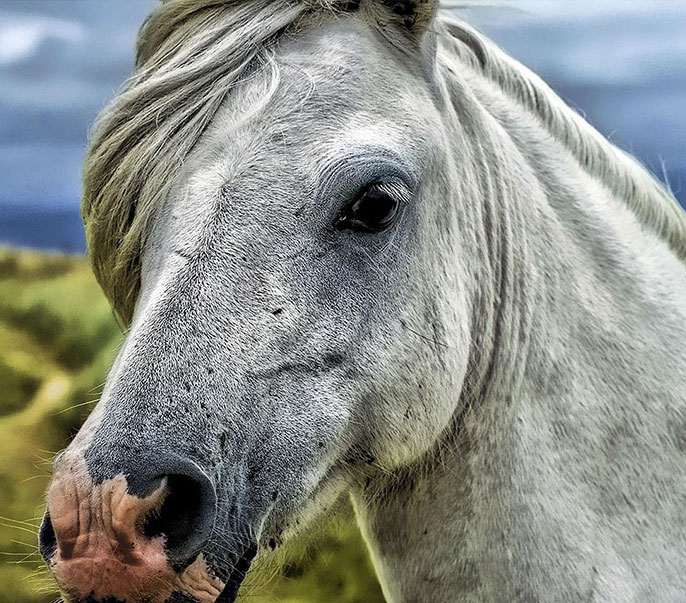 Name for a wine defect that occurs mainly in red wines, but for which there are many other names. These are Apeshit (South Africa), Bodenton (see Geosmin), Brett, Hansaplast, dog sweat, leather clay, medicine clay, wet dog, wet coat, wet leather, horse stable, horse clay, phenol clay, saddle clay, sweat socks, stable smell and tar clay. This proves that in the past the fault was often not clearly identified or not even classified as a fault. This is because it occurs in internationally renowned red wines, in Belgian beers and in ciders as a perfectly accepted typical aroma.

Only through scientific analysis could the same microorganisms be identified as the cause of all these off-flavors. It is not uncommon for horse sweat to occur together with the wine defect mice. The off-flavour is more pronounced in red wines that have undergone barrique ageing, especially in new barrels, and/or maceration carbonique (carbonic acid maceration). The main causes are lack of hygiene such as unclean wooden barrels and/or too little sulphur.

The type of yeast causing this is called Brettanomyces (from which "Brett" is derived) or Dekkera. The species Brettanomyces bruxellensis is a slowly fermenting, highly alcohol-compatible and non-spore forming species. In addition to the usual sugars, it can also process the normally non-fermentable cellubiose and xylose contained in the wood structure of new barrique barrels. It can also multiply without any sugar residues, as ethanol and volatile acids are sufficient as food. This type of yeast is found in all wine-growing regions of the world, although it is preferred in warmer areas. It forms various ethylphenols during metabolism. Acetic acid is also produced as a specific side effect.

In 2004, three substances were identified as causing the horse sweat or the typical taste sensations. The typical aromas can already be identified at the perception thresholds indicated in the microgram range (millionths of a gram). A negative influence already occurs when the sum of the latter two exceeds 425 µg/l:

If the three lead substances are only slightly pronounced or in a correspondingly favorable ratio, the aroma is expressed by a pleasant smoky, leathery smell of cloves. It is described as animal-like or earthy, in which the alcohol type geosmin is also involved. There is the slogan "a little bit of board is nice", because this is perceived as positive by quite a few consumers. This note is typical for many Australian and South African wines made from the Syrah grape variety. There and also in Bordeaux this is even considered a typical characteristic of the soil (therefore also soil clay) or the type of vinification.

There are even wineries that inoculate their barrels specifically with Brettanomyces fungi in order to consciously produce this clay. In Austria the positive term "Stinkerl" is used for this. However, most experts reject the clay on principle and regard even a small amount of it as an intolerable wine defect due to a lack of hygiene. In addition to the above positive aromas, the wine has a sweetishly sharp and sourish tone, which is penetratingly reminiscent of horse sweat or horse stable, vinegar, pharmaceuticals, burnt beans, smoked bacon, clay and tar.

Although Brettanomyces yeasts can be completely removed from the wine by filtration, it is not possible to remove the leading substances causing the faults, because these are present in dissolved form. If such wines are bottled unfiltered, the yeasts can still multiply in the bottle. The germs survive in the pores of wood, tartrate and other sediment residues of the emptied barrel until the next filling. Old and unkempt barriques are therefore ideal nesting places for Brettanomyces yeasts.

When maturing in stainless steel tanks, as is usually the case with white wines, the wine defect horse sweat hardly occurs. An effective preventive measure is sulphurization of the wooden barrels through dry or wet conservation. The preservative dimethyldicarbonate is used as a further preventive measure. A control is done by means of PVPP (polyvinylpolypyrrolidone). Brettanomyces can be detected in wine by the PNA-FISH method. See a list of all off-flavors under wine defects.