All the hollow measurements valid worldwide today are based on the metric system (Table 1); see also under Dimensions. In addition, very old hollow measures are still in use (Table 2). The Anglo-American measurement systems are almost only used in the USA, England and some other countries (Table 3). The old Roman hollow dimensions are included under Congius. In the sources on old units of measurement, the information on volumes is often different and the differences are sometimes considerable. See also other lists of measures under the keywords barrel types, area measures, bottles, units of measurement, area under vines, wine containers and wine production quantities.

In the past, a distinction was usually made between hollow dimensions for liquids (liquid dimensions) and hollow dimensions for solids (dry dimensions for nuts, salt, flour and grain, for example). In some cases, the dry masses were further divided into those for "smooth fruit" (e.g. hulled grain) and those with "rough fruit" (after threshing, not hulled). The picture shows six hollow measures from the "Mens ponderia" in Pompeii, a municipal institution for checking dimensions and weights. These were found during excavations in the area of the 79th century, which was excavated by the Vesuvius eruption. AD, destroyed by the eruption of Vesuvius. 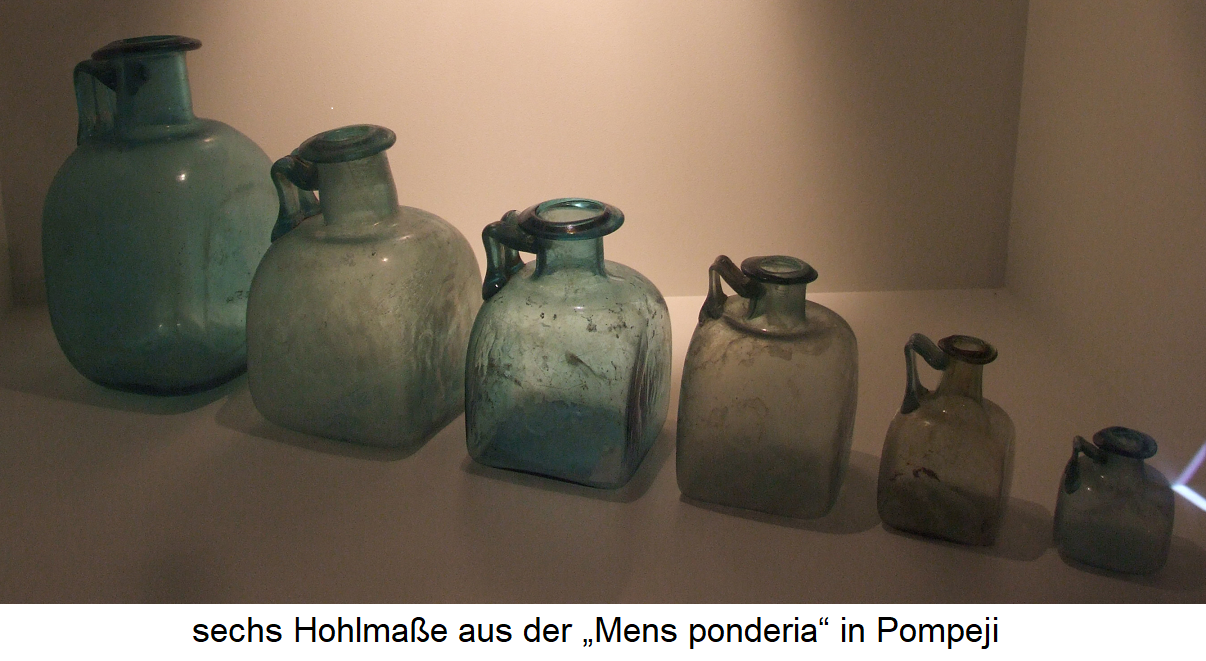 The origin of this system of measurement lies in medieval England and became valid in the area of influence of the former British Empire. There are several variants. In the USA in 1893 the reference to the own measuring standards was given to the basic units yard and pound, the corresponding metric measuring standards were determined. With the introduction of the unified "International Yard" in 1959, all countries except Great Britain made a final change to the metric units of measurement. In the 19th and 20th centuries, the Anglo-American measurement systems were officially used in the United Kingdom and its colonies as well as in the USA.

Although Great Britain had committed itself in 1973 to abandon the system of measurement in favour of the metric system, the changeover met with great resistance. In order to facilitate this, both measurement systems were originally to be used in parallel until 2010; this exemption was changed to an unlimited one in 2007. In the USA, the Anglo-American system of measurement in the variant of "Customary units" (historical form of the British system of measurement) is still fully in use as the main system of measurement. Some Anglo-American measures are also used internationally, but often not as actually measured quantities, but as a nominal designation. For example, oil is traded on the stock exchange in barrels, but is weighed in tons. The "imperial units" are still widely used, especially in the everyday lives of citizens. The situation is similar in Ireland, Canada, India, Malaysia, Australia and New Zealand.