The south-east facing vineyard with a slope gradient of 5 to 25% comprises 66 hectares of vineyards on highly variable soils with predominantly hanging debris mixed with lime, clay marl, loamy sand and sandy loam. The Riesling variety is mainly cultivated here. The Argus Peter, Minges Theo, Sauer Heiner and St. Annaberg wineries have a share in the site.

The location was sold in 1273 by the Cologne Cathedral Chapter to the Mainz Cathedral Chapter. The vineyard, which faces south in the direction of the Main river at an altitude of 75 to 100 metres above sea level with a 30% incline, comprises 44 hectares of vineyards. The microclimate is determined by the Taunus Mountains, which provide protection from rain and wind, and the temperature-equalizing Main River. The soil consists of loess with gravel and clay marl. The site also has spring horizons, which are created when shifting water comes to light, which flows underground from the Taunus towards the Rhine and creates a spring. This also includes a captured spring in the Queen Victoriaberg, which belonged to the Hochheim Hell before it became an independent individual site in honour of the Queen of England. Above all, Riesling is cultivated here. Shares in the vineyard are, for example, held by the Domdechant Werner'sches Weingut, Flick Joachim, Himmel Emmerich, Künstler Gunter and Schloss Schönborn. 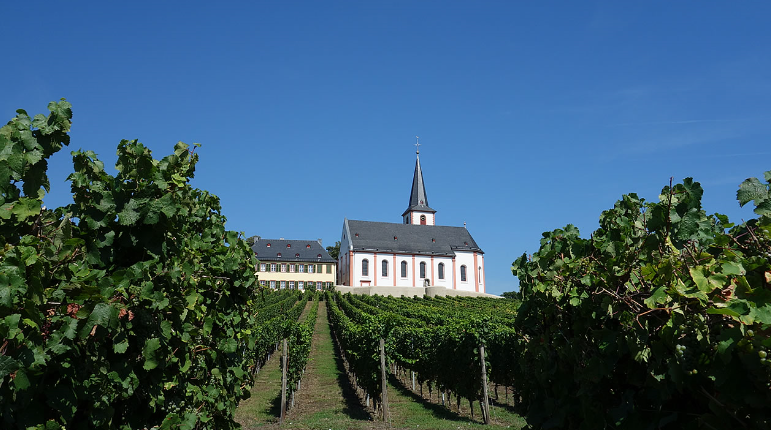 The location was first mentioned around 1180 as "Helda in Monti Sanctis Johannis". The vineyard, facing south to southwest at an altitude of 150 metres above sea level with a slope gradient of up to 30%, comprises 19 hectares of vineyards. The geologically diverse soil is dominated by loess and loess clay, as well as gravel with stones. The Riesling variety in particular is cultivated here. Shares in the vineyard are, for example, the Ankermühle, Bischöfliches Weingut Rüdesheim, Chat Sauvage, Dr. Corvers-Kauter, Privy Councillor J. Wegeler Erben, G.H. von Mumm and Johannishof Eser. Adjacent to it lies the small single vineyard Mittelhölle.

The south-southeast to south facing vineyard with 30 to 60% slope inclination comprises only 1.5 hectares of vines on medium to deep grey slate soil with loamy portions. Only the Riesling variety is cultivated here. The site is solely owned by the Vereinigte Hospitien winery.