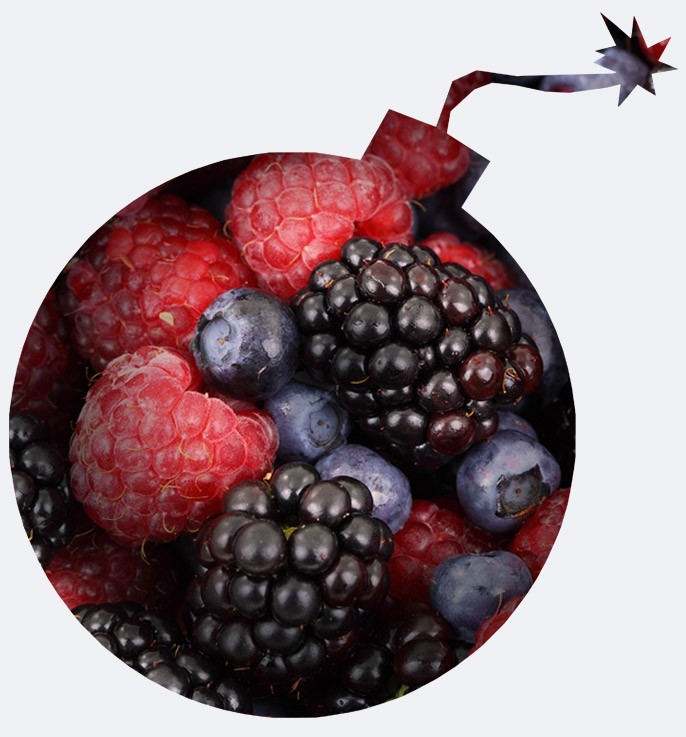 Designation for the taste or overall impression of a wine in the context of a wine appeal. This is mainly used for red wines that have a full, round and juicy fruit flavour (blueberries, blackberries, currants, raspberries, cherries).

They are characterised by rather mild tannins, other typical red wine notes such as leather, coffee or tobacco are less pronounced. Since the 1990s, such wines, often made from the preferred varieties Cabernet Sauvignon, Merlot and Syrah, have become popular because they cover a wide range of consumer tastes.

Such fruit bomb wines are particularly popular overseas, where they are made using winemaking methods that are sometimes only permitted there. By adding oenological tannins also in liquid form (prohibited within the EU), which tastes softer, the drying wood tannin is replaced. In the same way, essences (also forbidden within the EU) are also added, which make the wine softer, rounder, sweeter-fruity, chocolatier and more vanilla. A technique that is also common and permitted in Europe is cryomaceration (cold maceration), but this is not undisputed.

Today, the average consumer (and even wine tasters) can hardly tell the difference between what is real fruit and what is wood sweetness. In contrast to terroir-influenced wines, such wines taste very similar regardless of their origin and vintage, which makes them interesting for certain groups of buyers. This is criticised by critics and the designation is also not to be understood as positive in every case. The so-called Coca-Cola wines have a similar characteristic. It is said that the US wine critic Robert Parker (*1947) prefers such wines (which he strongly denies). For this reason, certain producers parkerize their wines to this style. See also aroma, smell and taste.