One of the Geographical Units in South Africa; see there.

In 1652, the Dutch doctor and merchant Jan van Riebeeck (1619-1677) founded Cape Town, named after the Cape of Good Hope, about 45 kilometres to the south, and three years later planted the first vines brought from Europe at the foot of Table Mountain near today's capital. The first vintage was a 1659 with 15 litres of Muscat wine. From the end of the 17th century onwards, it was the 200 Huguenots who were expelled from their French homeland, as the name of the wine-growing region Franschhoek (French Corner) reminds us, as well as German and Dutch winegrowers who further developed South African viticulture. Their descendants still play an important role today. The Dutch governor Simon van der Stel (1639-1712), who was appointed from 1679, founded the town of Stellenbosch and in 1685 laid out the famous Constantia vineyard, from which one of the most legendary sweet wines in the world called "Vin de Constance" was produced for the European ruling courts at that time. In the 17th century, large quantities of port and sherry style wines as well as brandy were exported to England. In the 18th and 19th centuries, Dutch governors successfully promoted viticulture. In 1885, phylloxera also reached South Africa and caused devastating damage. 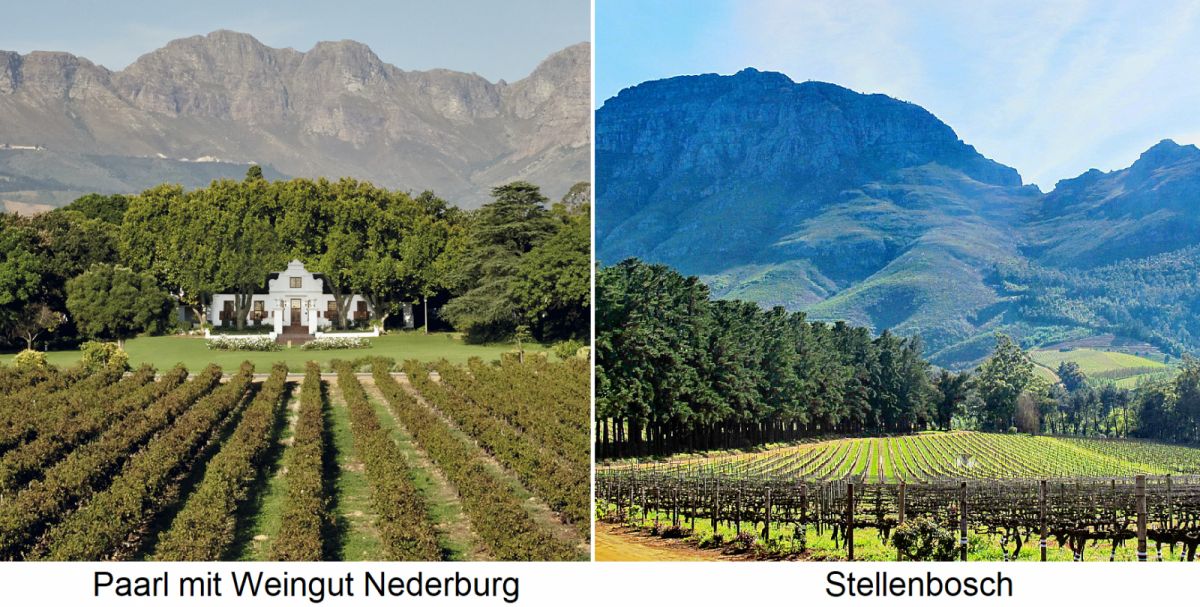 Racial segregation was introduced after the founding of the Union of South Africa in 1910 (the black population was excluded from the vote) and intensified after the Second World War (the term apartheid was coined from Afrikaans "apart" = single, special). Due to the resulting boycott by many countries, South Africa was increasingly cut off from exports. In 1918, due to a wine crisis (overproduction, poor quality, bankruptcy of many companies), the KWV (Kooperatieve Wijnbouwers Vereniging van Zuid Afrika) was founded. This state control body then totally dominated the entire South African viticulture until the beginning of the 1990s. The apartheid policy was abandoned in 1991 and the right to land ownership was opened to all races. Demand from abroad then skyrocketed and wine has become one of the most important export goods. In 2002, the non-profit organisation WIETA was founded, which, among other things, works to improve working conditions in the wine industry.

There are almost 4,000 grape producers, about 60 cooperatives (winegrowers' cooperatives), about 500 private wineries & cellars and over 20 wholesalers. The largest wine estate is Nederburg (Paarl), where the first South African Botrytis wine called Edelkeur was produced by Günter Brözel (next to Tim Hamilton Russel) one of the South African winegrowing pioneers). An important auction is held here every year. KWV International plays an important role as a producer and trading house. Another large company is the Stellenbosch Farmer's Winery (SFW). A traditional speciality, as in the past, are the sweet dessert wines produced in the style of sherry and port. From Chenin Blanc and the Muscat varieties, simple carbonated bubblies (sparkling wines) are produced in large quantities, but also sparkling wines according to the méthode cap classique. The Pinotage variety, created by the legendary viticulture pioneer Professor Abraham Isak Perold (1880-1941), provides Cape specialities with deep dark, full-bodied red wines. From the 1950s onwards, temperature-controlled, chilled fermentation became common, especially for white wines, through the use of stainless steel tanks.

The climate is ideal for viticulture. The proximity to the Atlantic Ocean in the west and the Indian Ocean in the east characterises the "wine between two oceans". There is a long, mostly sunny summer and (from May to September) a mild but humid winter. The cold wind from the southeast is called the "Cape Doctor" because it cleans the air. Winegrowers fear it because it can damage the vines. In terms of climate, soil type and wine type, a distinction is made between two main regions: the more temperate, rainier Coastal Region, influenced by the Artlantic, with mostly dry white and red wines, and the rainier, hotter Klein Karoo, Olifants River, Robertson and Worcester regions, separated by mountain ranges, with alcohol-rich dessert wines. Especially the coastal areas like Constantia, Durbanville, Overberg, Philadelphia, Stellenbosch are influenced by the nearby sea. Cooling breezes and nightly cooling make for long ripening periods and are conducive to quality wines. In the warmer areas,...