Term (also "Bescheidtun") for the ritual form of alcohol consumption, whereby the drinker wants to pay tribute to a deceased or living person or a group of persons by drinking to them. Drinking also means the mutual greeting. Often a short speech is given or at least a suitable toast is pronounced. Along with the greeting with bread and wine, which is already described in the Old Testament of the Bible, drinking toast is one of the oldest drinking customs of mankind. As long as the others drank, a man was not allowed to withdraw, even to the point of unconsciousness. In this way a man should prove himself strong. Not returning to drink was often taken as a grave insult. The consequences could be social, societal and economic exclusion and also physical attacks. A certain role was also played by the conviction that, according to the saying "In vino veritas", the true character of a man was revealed under the influence of alcohol. Due to these circumstances, drinking excesses with fisticuffs up to manslaughter occurred very often.

From the late Middle Ages onwards, therefore, more and more the church, but also the humanists, preached against the "devil alcohol". Martin Luther (1483-1546), for example, spoke of the "devilish habit of excessive drinking". In Austria (Vienna), the clergymen Abraham a Sancta Clara (1644-1709) and Johann Rasch (1540-1612) fought against the excessive consumption of alcohol in word and writing. As early as 1495, a Baden state order prohibited drinking, and from 1516 onward, in the Bamberg area, drinkers and innkeepers who tolerated drinking were punished with three Rhenish guilders or three days with water and bread. There were similar regulations in many other areas. For example, in 1525 in South Tyrol, in the "Meraner Articles", drinking was forbidden and described as a "completely impudent vice", since "not only men, but also women and virgins were drunk and made full". As a consequence, in some countries the legislation influenced this and the so-called "Zechrecht" (drinking law) developed. 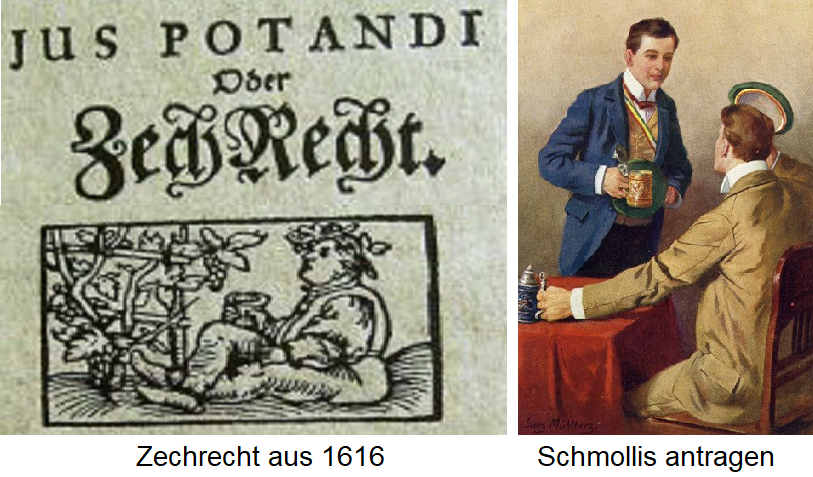 In student fraternities the word "Du" was and still is offered with the term "Schmollis", which was and is replaced by "Fiducit! (It applies) and drinking. This is derived from the Latin "sis mihi mollis amicus" (meaning "Be a close friend to me!"). A special, ritualized form of drinking is common in many fraternities as part of the academic drinking culture. One colour student pays tribute to another by drinking a certain amount of alcohol. As a rule, this is mainly beer. This is done according to the rules of the beer commentary, usually with the words: "Dear colour brother 'Couleurname' (beer name, nickname), I bring you a wide (huge) stripe". According to the respective rules, it is now up to the honoured person to drink to the honoured person as well, or is obliged to do so, if necessary. Foxes (novices) can only drink to boys (full members) via the fox major (junior supervisor), but among themselves. The rules are different for each fraternity.

The "Salamander" (also called "Schoppensalamander") is a festive form in honour of guests of the fraternity or particularly deserving friars of the fraternity. A salamander is "grated" on command. To this end, all participants stand up and, on the command "ad exercitium salamandri" (Latin for "to perform the salamander"), drink their glass as completely as possible with the shout of cheers. Afterwards the glasses are rubbed or rattled on the table and on one command at a time clearly audible one or three times on the table with a short loud beat at the same time. In case of death, a silent funeral salamander in honour of the deceased is customary (i.e. without rubbing or rattling). The glass of the deceased is then shattered. The toast "Prost" is common in all rituals in German-speaking countries.

Other customs concerning the consumption of alcohol are described under Customs in viticulture, Brotherhood drinking, libations, toasts and quotations. The quantities of alcohol that are not likely to be harmful to health are explained under Health with further information. Regarding alcohol abuse from antiquity to modern times with bizarre stories and prominent protagonists, see intoxication and drinking culture.