Greek god of vegetation, viticulture and ecstasy or intoxication. He was also called Bromios (noisy) or Bakchos (shouting, screaming) because of the noise his entourage made. This is where the name Bacchus, which is commonly used in Roman mythology, comes from. He is usually depicted with ivy or vine tendrils and grapes. His outward attributes are the thyrsos staff surrounded by ivy and vines as a symbol of fertility and the kantharos (drinking vessel for wine) shown in the middle of the picture, on which Dionsysus is depicted with a satyr (left) and in conversation with the messenger of the gods Hermes (right). Dionysus also holds such a kantharos in his right hand. Female companions of Dionysos were the maenads. The oldest mention of him dates from the 13th century B.C., although there are quite different versions of his birth and life story.

According to the most common version Zeus sired Dionysos with the beautiful Semele, daughter of Kadmos, King of Thebes. This divine infidelity is regarded as the founding act of the winegrowing culture in Greece. Through intrigues of the jealous wife of Zeus, Hera, Semele was unintentionally killed by Zeus by showing himself to her in all his glory at her explicit request and thereby burning her. Zeus removed the still unborn Dionysus from her womb and let him mature in his hips for another three months. To protect him from Hera, he grew up in a cave and was raised by nymphs. As an adult, however, he was discovered by Hera and beaten with madness, so that he wandered aimlessly around the world, reaching as far as Egypt and Syria. Finally he was cured by the Titaness Rhea.

On the way to Italy Dionysus was captured by Tyrrhenian pirates. He proved his divine power to them by taking the form of a lion, mauled the leader of the pirates, made ivy grow up the mast of the ship, thus transforming the mast into a vine, so to speak, and making vines and grapes grow on the sails, turning the pirates into dolphins. Ampelos, his companion Ampelos, killed in the hunt, grew the first vine. Dionysus planted it first in the bone of a bird, then in the bone of a lion and finally in the bone of a donkey. So he could take the vine with him everywhere. The name of the ampelography goes back to Ampelos.

Dionysus now moved from place to place and taught people his ceremonies and the cultivated cultivation of wine. To all those who were kind to him he gave sweet wine, joy and consolation. Among other things he brought a vine to the Aeolian king Oineus and taught him how to cultivate it. Those who rejected him, however, were severely punished by him, as the wine drove them to frenzy and atrocities. This also symbolizes the two sides of wine enjoyment. On his exuberant processions with orgiastic cult ceremonies he was accompanied by female Dionysiads (also maenads) and nymphs, male satyrs, as well as the shepherd god Pan. With the fertility goddess Ariadne, Dionysus sired several sons, including Oinopion (wine face) and Staphylus (grape). The picture above right shows a Panther quadriga with Dionysos and Ariadne at the Semper Opera in Dresden. The picture below shows the "Triumph of Dionysos (Bacchus)" (return from Asia and connection with Ariadne). 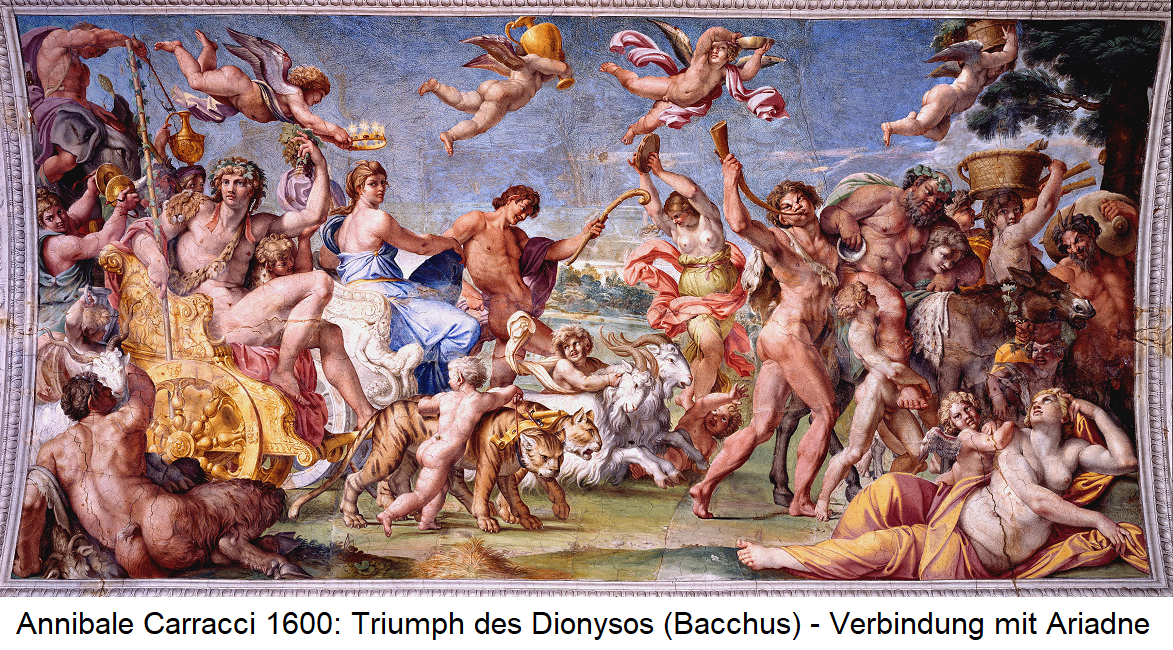 Until the 5th century BC, Greek drama developed in three forms: tragedy, comedy and satyr play. The theatre plays always took place during the Dionysia (festivals) in honour of the god. One of the winners was the famous Greek comedy poet Aristophanes (450-380 BC). The little Dionysias were celebrated from March to April and the big Dionysias in autumn at the time of the grape harvest. They included sacrifices, banquets, competitions, processions and dirty jokes and were characterised by exuberance and licentiousness combined with excessive wine consumption. The primary aim was to make intoxication a purifying ceremony with a psycho-hygienic effect. The bucks were sacrificed to Dionysus, because the buck, as a voracious destroyer of the vine, had to be slaughtered to atone for it. Symposia were also held in honour of the god, which were drinking parties with moderate wine consumption.

The Romans imitated Dionysia through the bacchanalia. But they degenerated into such licentiousness that they were banned by the senate. The vine was particularly sacred to Dionysus. Later, the holiness of vine and wine became part of the Christian religion. The Lord's Supper is the culmination of the appreciation of wine and the transformation of bread and wine into Christ's body and blood at the Eucharist as the central statement of faith of Christianity. Petronius (+66) describes a colourful depiction of the eating and drinking culture of the Roman upper class in the first century in his work Satyricon