Designation (also Hofschenk) for the function at manorial courts or noble houses for the preparation and tasting of beverages, especially wine. Due to the constant (and often justified) fear of intrigues and attempts to poison the people, this responsibility was mostly assigned to noble persons in whom the sovereign placed his full trust. Already in the Bible in the 1st book of Moses (Genesis) a cupbearer of Pharaoh is mentioned. At the court of Alexander the Great (356-323 B.C.) Iolaos (son of the general Antipatros) was among others active as cupbearer. According to a hypothesis that is no longer considered credible today, he is said to have poisoned Alexander on behalf of his father. In the Middle Ages, the Bouteiller was responsible for the cellar and the drinks at the princely courts (Latin Buticularius or Pincerna, English butler). The Échanson (waiter) was responsible for tasting the drinks before drinking them. It was also common that both had to taste. Often the responsibility for the two functions was given to one person (Bouteiller-Échanson). 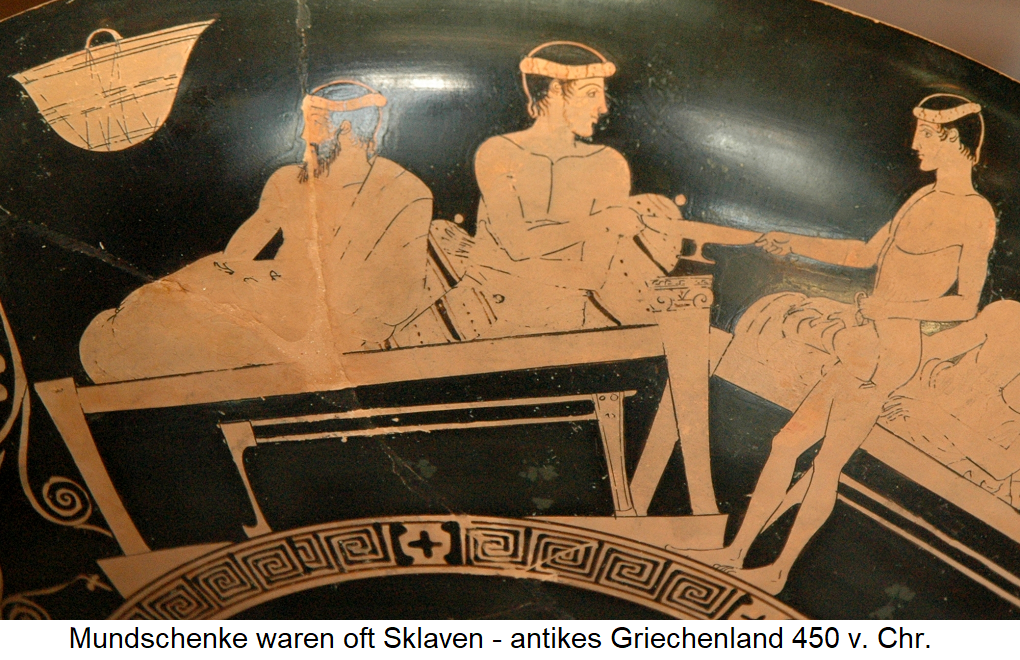 Wine was one of the main drinks at the aristocratic courts and was often enjoyed in abundance and excessively. The Cupbearer, as overseer of the princely vineyards and wine cellars, was one of the four most important offices at the royal courts, along with the Marshal (Stable Master), Treasurer (Treasurer) and Truchsess (also Droste; Head of the Court Administration). This was an important and highly respected function of trust, because in addition to the entire logistics of procurement, storage and serving, the Cupbearer was also responsible for the quality of the beverages and also for health matters. It was a sensitive and responsible function, because assassinations by means of poisoned drinks were quite frequent and also relatively often successful in these times. Similar to the office of the taster known in ancient times, the ruler thus entrusted the Cupbearer with his health and well-being.

Since the Carolingian period (7th century) the Cupbearer was also responsible for the administration of the royal vineyards. At larger princely courts, the function of the Cupbearer developed into a court office, which often became hereditary in a high-ranking noble family as an honorary position, but was usually exercised by a deputy. Later, in the Holy Roman Empire of the German Nation, the Cupbearer's office even became one of the four hereditary arch-offices at the imperial court that were associated with the secular electoral dignity. The archdeaconry of the Imperial Cupbearer was held by the King of Bohemia from 1114. However, the archduchal offices, like those of the imperial cupbearer, were purely honorary titles. The actual tasks associated with the offices were performed on behalf of the Electors by the holders of the imperial offices (pincerna imperii). During the coronation celebrations for the Roman-German Emperor in Frankfurt am Main, the latter was responsible, among other things, for ensuring that wine was served to the people free of charge. The modern form of the cupbearer is, so to speak, the sommelier. See also under customs in viticulture and viticulture education.