One of the six major regional IGP areas for the production of local wines in France. The other five are Atlantique, Comtés Rhodaniens, Méditerranée, Pays d'Oc and Val de Loire. It is located in the southwest and includes the 12 departments of Ariège, Aveyron, Cantal, Gers, Haute-Garonne, Hautes-Pyrénées, Landes, Lot, Lot-et-Garonne, Pyrénées-Atlantiques, Tarn and Tarn-et-Garonne. The "County of Toulouse", which existed until 1271, was a feudal territory and included part of it. The area is bordered by the Atlantic Ocean to the west, Spain to the south, Languedoc-Roussillon to the east and Bordeaux to the north. The name Comté Tolosan may be followed by the narrower geographical indications Bigorre, Cantal, Coteaux et Terrasses de Montauban, Haute-Garonne, Pyrénées-Atlantiques and Tarn-et-Garonne. Other independent IGP areas are Aveyron, Cotes de Gascogne, Côtes du Tarn, Gers and Lavilledieu. This is also where the AOC area Armagnac is located. 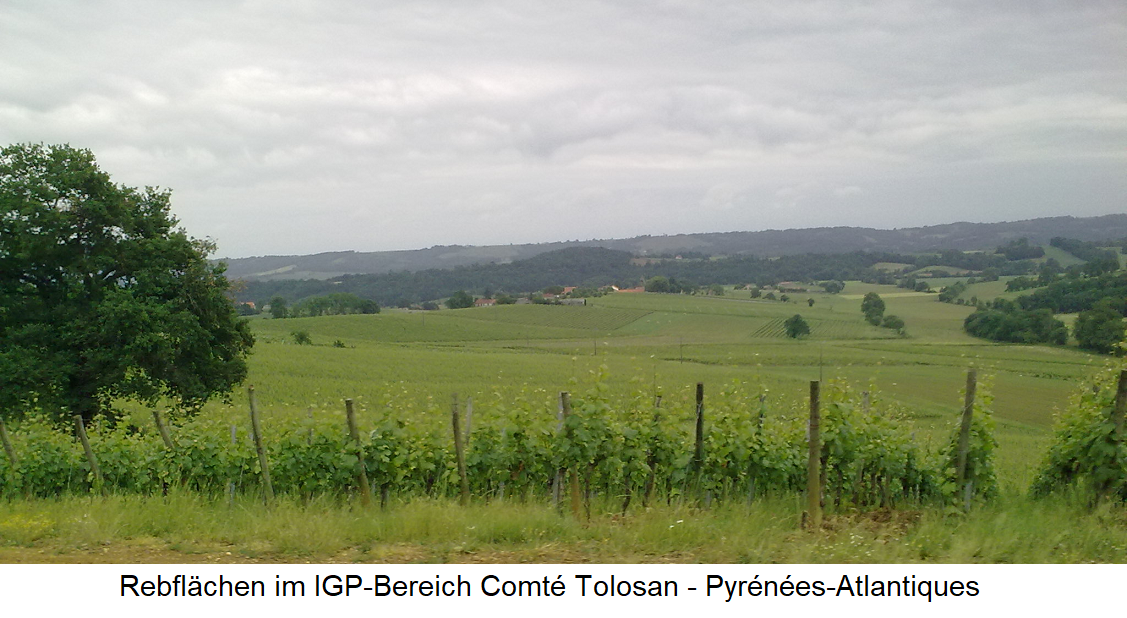 Most of the vineyards are located in the centre along the Garonne. The west has a relatively humid maritime climate and the east has a Mediterranean climate with dry and hot summers. On the left bank of the Garonne, mainly white wines are produced, on the right bank of the Garonne mainly red and rosé wines. The main red wine varieties are Cabernet Franc, Cabernet Sauvignon, Cot, Duras, Gamay, Tannat, Merlot and Négrette. The main white wine varieties are Chardonnay, Chenin Blanc Colombard, Len de l'El, Gros Manseng, Petit Manseng, Mauzac Blanc, Muscadelle and Sauvignon Blanc. Well-known producers are Cave de Crouseilles, Domaine de Baudare, Labastide-de-Levis, Producteurs Plaimont and Ribonnet.