Grand Cru location or appellation in the municipality of Morey-Saint-Denis in the Burgundy region of Côte d'Or. The name refers to Saint Dionysius of Paris (3rd century), in whose honour a religious community was founded in 1023, which owned vineyards here. The name Clos Saint-Denis was first mentioned in a document in 1367. After the French Revolution (1789) the church property was auctioned off. Today, the majority of the vineyards belong to the community. It was classified as Grand Cru in 1936. 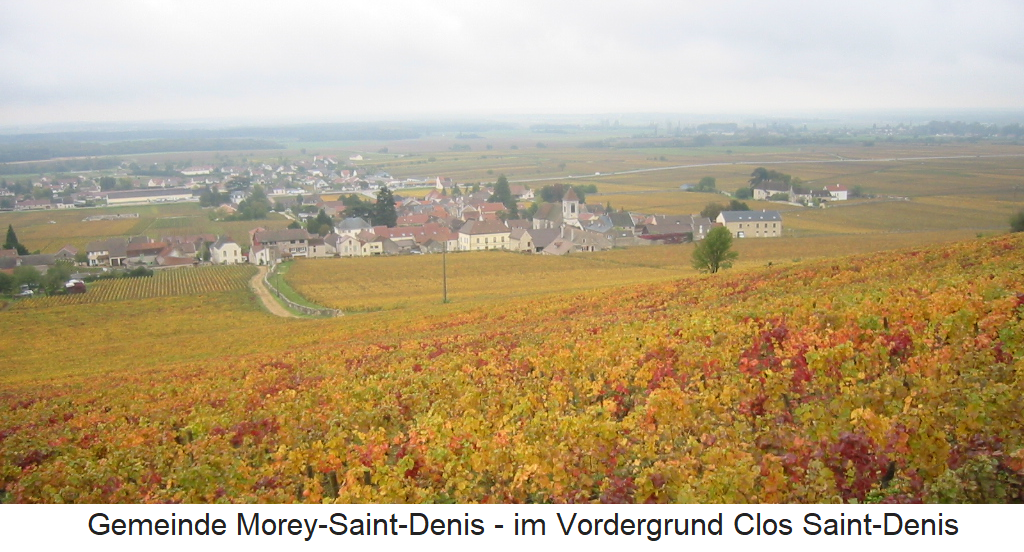 The vineyard, at an altitude of about 300 metres above sea level, comprises 6.6 hectares of vines on brown, calcareous marl with a relatively low proportion of stones. In addition to the historic Clos Saint-Denis (2.1 ha), the site also includes the Climats Calouère (1.3 ha), Les Chaffots (1.3 ha) and Maison-Brûlée (1.8 ha). It is made up of 37 plots, which are shared by nearly 20 owners. However, a walled enclosure (as indicated by the Clos) has probably never existed. To the north is the grand cru site Clos de la Roche, to the south is the grand cru site Clos des Lambrays. This extremely long-lasting red wine is made exclusively from Pinot Noir. But also Pinot Beurot(Pinot Gris) and Pinot Liébault are allowed, theoretically up to 15% Chardonnay and Pinot Blanc could be used. Well known producers are Charlopin, Dujac, Jadot, Lignier and Domaine Ponsot.

Informations about "Clos Saint-Denis AOC" in wein.plus Wine Guide
This page was last modified at 19 December, 2019 at 08:39.