The winery is located in the commune of Savennières in the French wine region of the Loire. The owner Nicolas Joly (*1945), who was already legendary during his lifetime, is one of the most important pioneers of biodynamic viticulture. The studied economist with MBA from Columbia University in New York took over his parents' winery in 1977. By chance he came into contact with the ideas of the anthroposophical Rudolf Steiner (1861-1925), was enthusiastic about them and in the 1980s he converted the entire estate consistently according to anthroposophical guidelines. In 1997, he published the book "Le vin - du ciel à la terre" ("Wine with soul") about this. The vineyards cover a total of 15 hectares. This includes the Coulée-de-Serrant (or Clos de la Coulée-de-Serrant) escarpment, which has already been planted by the Cistercians and is in their sole possession, with seven hectares of vineyards. This vineyard is classified as a separate appellation Savennières Coulée-de-Serrant. 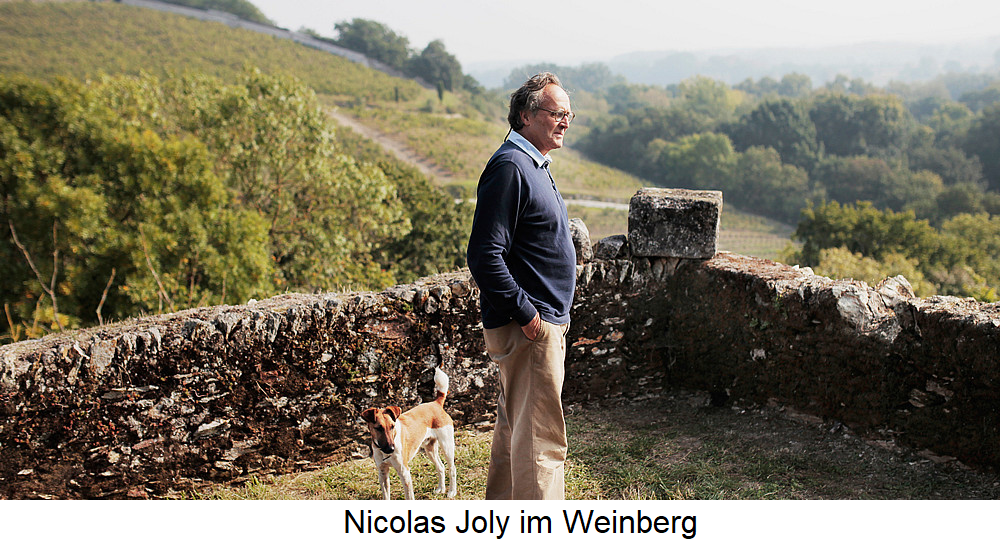 The 100% pure white wine "Coulée de Serrant", which is dry-matured from Chenin Blanc, has become a cult wine, is considered the best white wine of the Loire and is one of the best and most expensive wines in the world. Three hectares of the similar AOC Savennières Roche-aux-Moines also belong to the estate. From the vineyard "Clos de la Bergerie" located here, the white wine of the same name is pressed. Both wines reach their peak only after five to ten years at the earliest. Joly recommends decanting the wines for 24 hours. From three hectares of the normal AOC Savennières the white wine "Becherelle" is produced from Chenin Blanc. Nicolas Joly also founded the organic association La Renaissance des Appellations.

Informations about "EARL Nicolas Joly" in wein.plus Wine Guide
This page was last modified at 19 December, 2019 at 08:37.