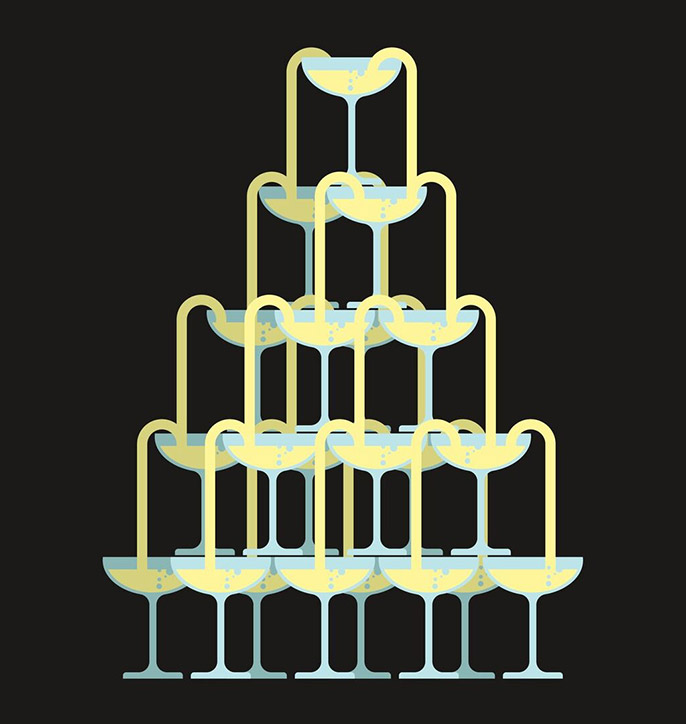 A popular gag at parties, for which at least ten glasses are needed. The Coupe is excellently suited for this. Champagne purists claim that this is the only sensible use of this glass form. For these ten glasses you need two normal bottles of champagne(sparkling wine) or a magnum. Six glasses are arranged in a circle on a flat surface, with the edges of the glass touching each other. Then three more glasses are placed in a triangle shape as a second level. The last glass is positioned exactly in the middle of the triangle. Now the uppermost glass is slowly and steadily overfilled until the six glasses of the lowest level are also filled. It is advisable to practice the procedure with water before.

Of course, there have been record attempts in this context, which are described in the "Guinness - Book of Records". In 1993 a 7.85 meter high pyramid was built in Las Vegas, which consisted of 47 levels and 23,642 glasses. The pyramid was built and filled by the champagne house Moët et Chandon. It should be noted that long-stemmed flutes were used. This record was far exceeded in 2004 in terms of the number of glasses. Employees of the Champagne House Leclerc-Briant built a 7.02 metre high pyramid with 33,081 glasses. The head of the company, Pascal Leclerc, was lifted by a crane to pour the glasses. However, the slightly easier stackable coupes were used. There is a video about it on YouTube (click). See also other curiosities under Customs in viticulture.