California can be called the motherland of viticulture in the USA. It also rightly bears the beautiful epithet "Wine State", because wine is an important economic factor here. The Spanish introduced the Spanish variety Listán Prieto to Mexico in the 16th century, which was called Misión here and later Mission in California. In 1769, the Franciscan monk Junipero Serra (1713-1784), when founding the Mission "San Diego" in California, is said to have planted the first vineyard with this vine (according to more recent sources only ten years later). Here there were not the great difficulties as on the east coast of the Atlantic Ocean, because the dry climate prevented fungal diseases and the vines thrived magnificently. 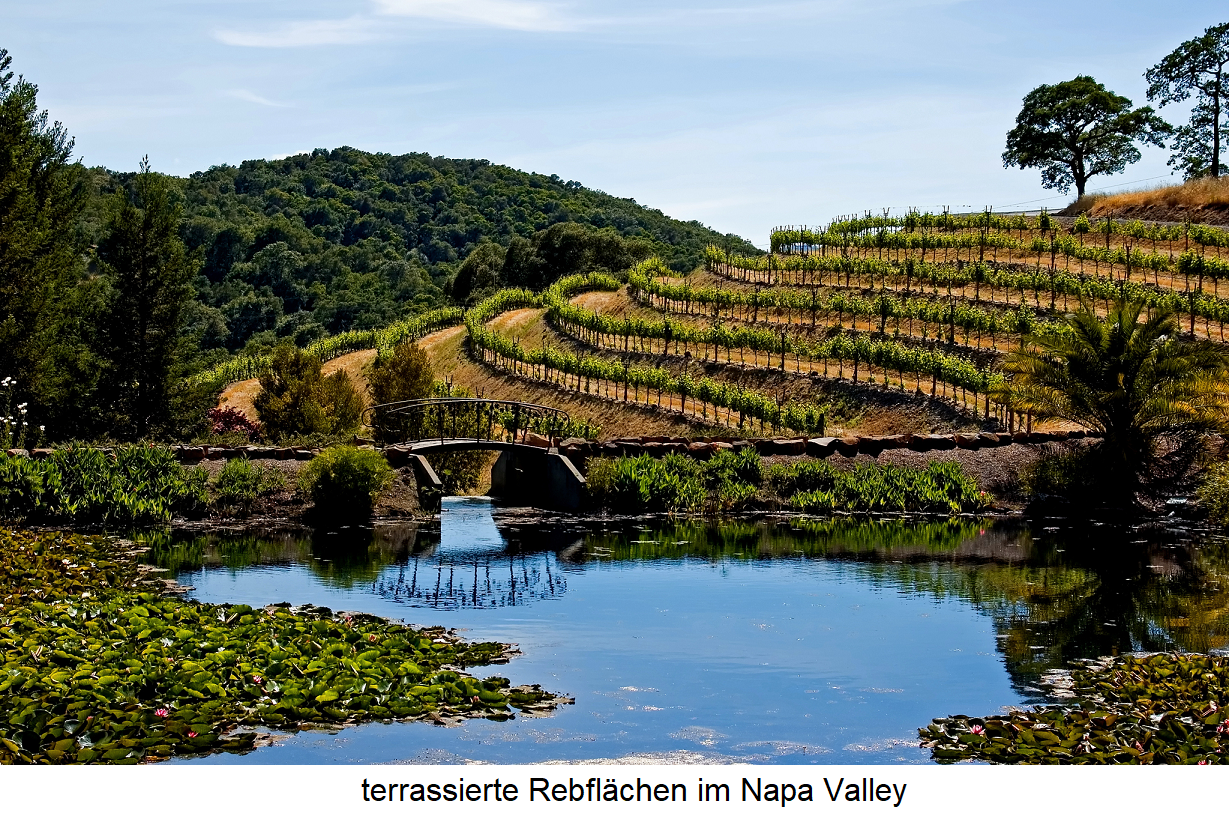 Wines were produced in a rather primitive way at that time; a contemporary report gives information about it: between two trees hung a cow skin (wine tube) filled with crushed grapes, in which the fermentation took place. At the very bottom was a stopper, which was simply pulled out to fill a cup of wine. Mostly the mission wine was distilled to schnapps and used to sprinkle the remaining wine. Around the year 1833, a Frenchman with the symbolic name Jean-Louis Vignes (1780-1862) planted vines near Los Angeles, the first ones imported from Europe. General Mariano Vallejo (1808-1890) was the last Mexican governor of California, which first became independent in 1846 and four years later in 1850 became the 31st US state. He had established a winery in Sonoma and was the first winemaker of great style. In 1849 gold fever broke out in California and wine made from Zinfandel became the most popular drink of the gold diggers.

The great breakthrough was initiated by the Hungarian Agoston Haraszthy (1812-1869) from 1860 onwards, who founded the Buena Vista Winery in Sonoma and introduced hundreds of European grape varieties. In the immediate vicinity, the German Jacob Gundlach founded a winery, which was reactivated in 1973 under the name Gundlach-Bundschu. Another pioneer was Charles Krug (1825-1892), a native of Prussia, who founded the Charles Krug Winery in St. Helena in the Napa Valley in 1861 and trained young winemakers. The French-born Paul Masson (1859-1940) became famous with his sparkling wine from 1892 and was called the "Champagne King of California". By the end of the 19th century, a diverse wine culture had developed with high quality wines from imported European Vinifera varieties.

Around 1880, the University of California founded a wine research center in Berkeley, which later became Davis. By 1890, one million hectolitres of wine had already been produced. The phylloxera catastrophe from 1880 onwards destroyed many vineyards, but they were rebuilt. But the prohibition (1920-1933) brought the total decline of the American wine culture. Only in the 1950s did a revolution begin. It began with small wineries experimenting with Chardonnay and Pinot Noir as well as French oak barrels. The pioneers who were largely responsible for the upswing were Robert Mondavi (1913-2008), who founded his first winery in 1966 in Oakville in the Napa Valley, and Joe Heitz (1919-2000). Both were supported by the famous oenologist André Tchelistcheff (1901-1994). The high quality of Californian wines was also confirmed by an already legendary winetasting (Paris Wine Tasting). 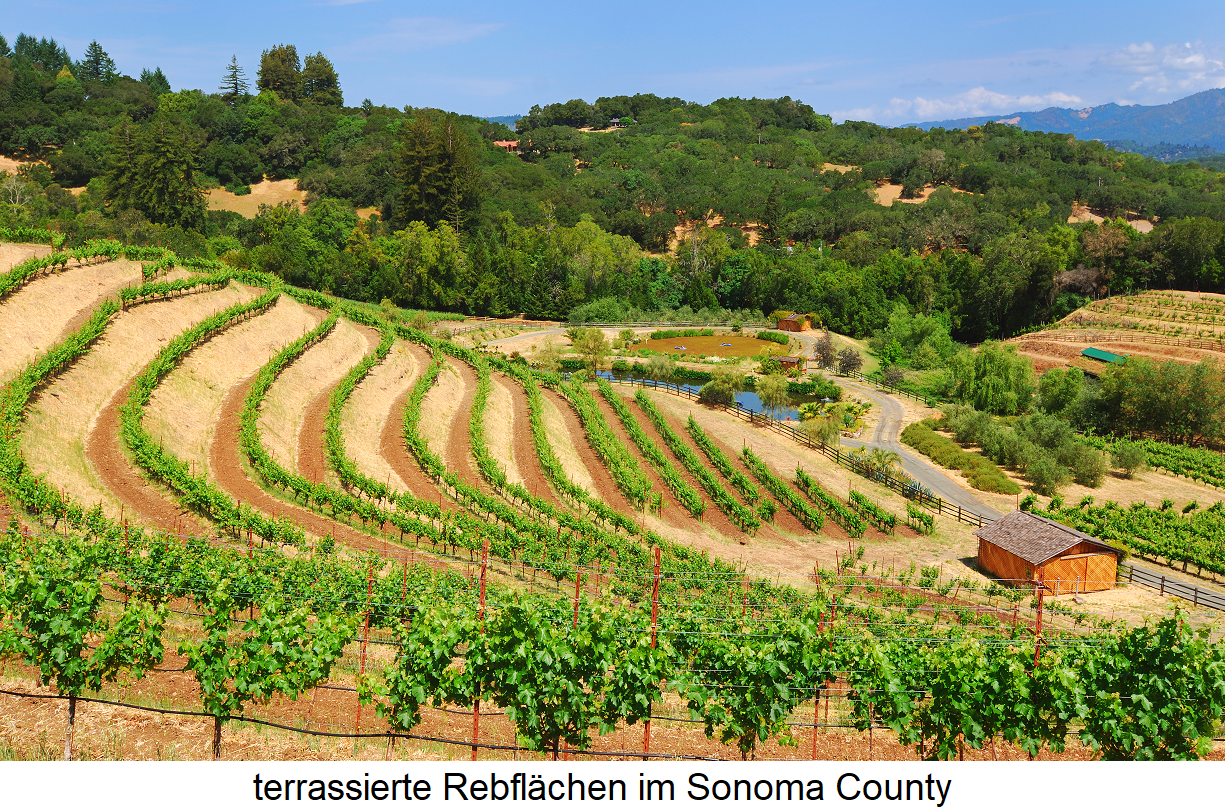 California is divided into five major wine-growing regions, which are by no means congruent with the climate regions listed below. The regions are divided into political counties (provinces), each with several AVA areas. These can also extend beyond the political county boundaries, as is the case with Wild Horse Valley (counties Napa and Solano) and Los Carneros (counties Napa and Sonoma):

Central coastThe region covers about 25,000 hectares of vineyards. It forms a 560 km long strip from the north south of San Francisco Bay to Los Angeles in the south.

North CoastThe region covers 50,000 hectares of vineyards. It forms a 160 km long and 80 km wide strip from San Francisco Bay up to Mendocino. It is also home to the most famous wine region, the Napa Valley.

Sierra FoothillsThe region between the Central Valley and the Rocky Mountains was once very important. Today it only has 2,100 hectares of vineyards.

South CoastThe less important region is located between the two cities of Los Angeles in the north and San Diego on the Mexican border in the south. 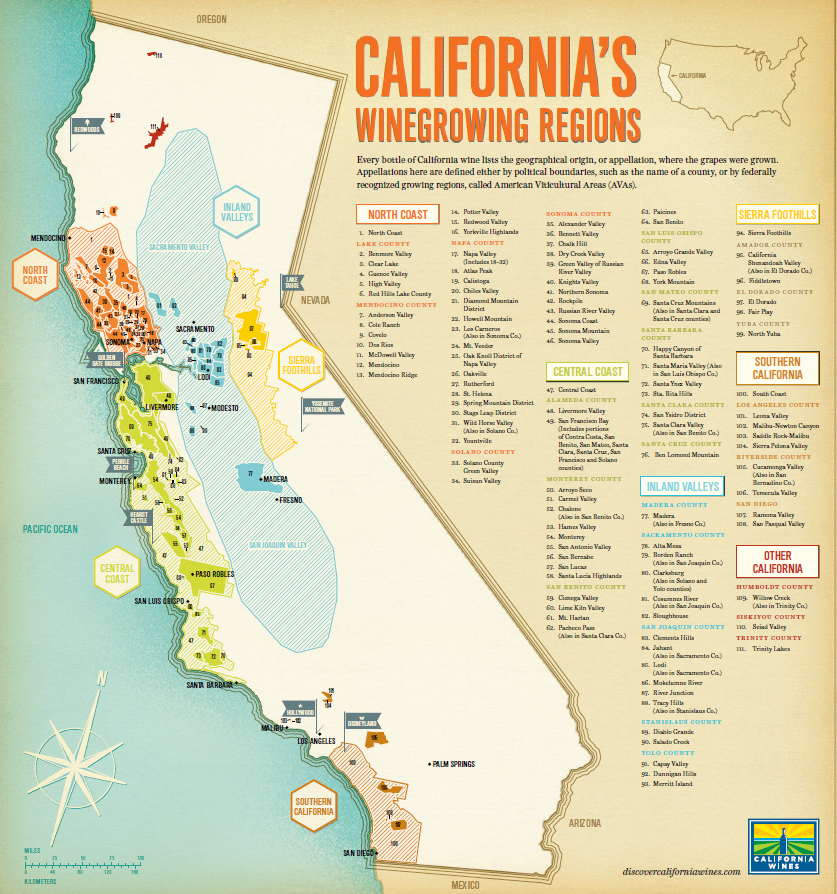 The vineyards extend over 1,000 kilometres along the Pacific coast. There are more different soil types than in any other wine-growing region in the world. There are over 30 in the Napa Valley alone, which is just under 50 kilometres long, and the most important wine-growing regions are located at the same geographical latitude as southern Spain and southern Italy. One of the variants for the name is that the Spanish gave the hot country the apt name "Caliente Fornella", in German "heißer Ofen" (hot oven). But there is also called a beautiful Amazon queen named Califia; a figure of a novel. Especially along the coast, the heat of the sun is considerably softened by the cool winds and fog of the Pacific Ocean. Between April and September there is hardly any rainfall, so that in many vineyards artificial irrigation is necessary.

The climates are very different, so that extensive analyses were already being carried out in the 1930s. At the University of California in Davis, the scientist Albert J. Winkler (1894-1989) created a division into five climatic regions or zones on the basis of a temperature sum system and then officially introduced it in 1944 as a classification system. As a basis for this, all daily average temperatures are measured from 1 April to 31 October. All values above 50 °Fahrenheit (10 °C) are added together and result in the "Degree-Days". If, for example, the average temperatures on a total of 130 days were 70 °F, a heat factor of 70 minus 50 x 130 (days) = 2,600 is calculated. Surprisingly, however, the precipitation quantities were not taken into account. For each region, recommendations are given for grape varieties, rootstocks and training methods. The best dry wines are produced in regions I, II and III, regions IV and V are especially suitable for alcohol-enriched wines, table grapes and raisins

Region I - heat factor up to 2,500 degree-days
Comparable with Moselle, Burgundy, Loire and Champagne. This region is particularly suitable for the varieties Chardonnay, Riesling, Pinot Noir and Sauvignon Blanc. These include Carneros and Mendocino (North Coast); Santa Clara, Santa Cruz and Monterey (Central Coast).

Region II - Heat factor 2,501 to 3,000 Degree Days
Comparable with Bordeaux (France) and Piedmont (Italy). The region is particularly suitable for the varieties Cabernet Sauvignon, Cabernet Franc, Merlot, Nebbiolo and Zinfandel. The best dry wines come from here. These include, for example, the southern Napa Valley and Sonoma (North Coast).

Region III - Heat factor 3,001 to 3,500 Degree Days
Comparable with Rhône and Tuscany. The region is particularly suitable for Grenache Noir (Garnacha Tinta), Sangiovese and Syrah. This includes for example the northern Napa Valley.

Region V - Heat factor over 4,000 Degree-Days
Comparable with Greece and Tunisia. These include parts of the Central Valley.

The wine law is quite simple and allows the producers a great deal of leeway. There are far fewer restrictions than in Europe. Among other things, winemaking techniques prohibited in the EU, such as spinning cone column or the addition of aromatic oak extracts and various aromatic substances, are permitted or permitted.

The Varietals (varietal wines) account for the bulk of production. They must contain at least 75% of the specified grape variety. For cuvées there is the special Californian term Meritage. The Generics (generic wines) carry a designation of origin. If a county is mentioned, 75% of the wine must come from there. If an AVA is named, it must be 85% and if a vineyard or vineyard location is named, it must be 95%. The previously widespread but incorrect naming of European designations of origin such as Burgundy, Chablis, Chianti, Sherry, Port and Rhine is now no longer permitted, at least for new wine brands, due to the wine trade agreement signed between the EU and the USA in December 2005 (see the relevant section in the Wine Act).

In 2012, the area under vines covered 320,000 hectares, and around 200,000 hectares will be used for viticulture. Of these, 18 million hectolitres of wine were produced (see also under Wine production volumes). The rest is used for the production of table grapes and (as the world's leading producer) raisins. There is a large variety of varieties with many new varieties created especially for Californian conditions. Around 40% of the vineyards are planted with white wine varieties and 60% with red wine varieties. Chardonnay has only reached the top in the last 20 years. The most common variety, Thompson Seedless(Sultana), occupies over 80,000 hectares, but is used almost exclusively for the production of raisins. The grape variety index of Celtic varieties 2010 (statistics Kym Anderson):

After the Second World War, the University of California conducted extensive field trials to find suitable rootstock vines. At the beginning of the 1960s, Davis recommended the use of AxR 1 rootstocks in coastal areas, which was done on a large scale. This turned out to be a big mistake, as this rootstock was only moderately resistant to phylloxera. Phylloxera made a comeback in the 1980s and caused huge damage to Californian vineyards. On the one hand, this was a disaster, but on the other hand it offered the chance to replace unwanted stocks.

Informations about "Kalifornien" in wein.plus Magazine DE
This page was last modified at 26 July, 2020 at 20:57.