Frequently occurring name for vineyards in Germany. The name refers to an existing or former church property or a diocese.

The name refers to ecclesiastical, prince-bishop and Kurmainz influences as well as the Engelberg monastery enthroned above the village. The vineyards, which face south-west to south-south-east with up to 60% slope inclination, comprise 53 hectares of vineyards on red sandstone soils. They are partly terraced with dry stone walls. The main varieties cultivated here are Riesling andPinot Noir (Spätburgunder). Shares in the vineyard are, for example, held by the vineyards Fürst Rudolf, Staatlicher Hofkeller Würzburg, Steintal and Wengerter Rainer.

In contrast to the individual vineyards Berg Schlossberg, Berg Roseneck and Berg Rottland, which are located on the Rüdesheimer Berg, the Bischofsberg belongs to the Rüdesheimer Oberfeld, which is the remaining part of the area around Rüdesheim. The first vineyards were planted in the last third of the 11th century, after the Archbishop Siegfried of Mainz left the stony and uncultivated land to the Rüdesheim subjects in 1074 and demanded considerably less than the usual tithe of the yield. With the land consolidation in 1970 further areas like Gessel, Krachbein, Kuhweg, Ochsenwiesen and Sonnenberg were added. The south-facing vineyards with flat slopes cover 34 hectares of vineyards, which are hardly threatened by late frost and are well wooded. As an extended, earlier primeval riverbed of the Rhine, deep loess deposits predominate. Here, mainly Riesling is cultivated, but also Ehrenfelser, Kerner and Müller-Thurgau. Shares in the vineyard have e.g. the vineyards Bischöfliches Weingut Rüdesheim, Chat Sauvage, Dr. Corvers-Kauter, Dr. Nägler, Freimuth Alexander, George, Kesseler, Klosterweingut Abtei St. Hildegard, König Klaus & Ursula, Leitz Johannes. 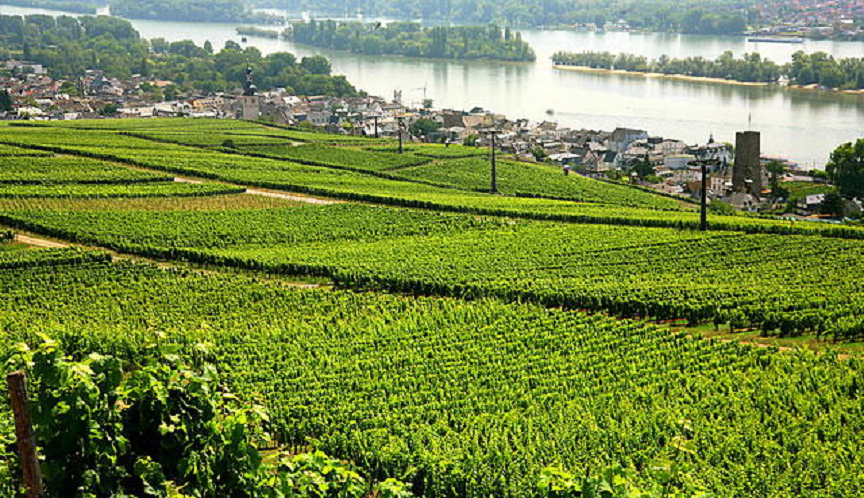