Designation for a wine maturing in relatively small wooden barrels, which are also toasted (toasted) on the inside walls by means of firing compared to conventional wooden barrels. It is therefore a special form of barrel ageing with the aim of introducing wood and roasted flavours into the wine. Through the barrique maturing process, various aromatic substances are also added to the wine. The name is derived from Barrique, the type of barrel mainly used in Bordeaux with a standard volume of 225 litres. However, larger barrels of up to 700 litres are also considered barrique barrels. Up to which barrel size one can speak of a "genuine" barrique maturing, however, is regulated differently in different countries. As a rule, the barrels are made of oak wood from special oak trees, mainly from France and America (and also local oak trees), but also other types of wood such as acacia or chestnut.

Invention of the barrique maturation

The French have been using this procedure for more than 200 years. One of the first is Louis-Gaspard d'Estournel (1753-1844), the owner of the Château Cos d'Estournel in the commune of Saint-Estèphe. At the beginning of the 19th century, he found out that some batches of wine that had not been sold overseas and had been returned had a better taste after being transported back. He decided to transport all his wines in wooden barrels before selling them. This was also favoured by the English as buyers of Bordeaux wines. They noticed that the wine transported in wooden barrels became more durable and demanded this quality.

A further popularisation was achieved by the transport to the German Hanseatic cities of Bremen, Hamburg and Lübeck, to which the Bordeaux wine was delivered as a red wine. Winegrowers from Bordeaux who visited their Hanseatic customers no longer recognized their own wines due to positive changes. Only later did toasting become common practice, i.e. toasting the barrels inside to create additional flavours. Worldwide, however, barrique ageing only became fashionable from the 1970s onwards and, after initial reservations, also became established in Germany and Austria.

The barrique wines are aged in these small barrels for a longer period of time, i.e. they are allowed to mature. Just by using a barrel once, it loses up to 85% of its aromas. A barrique barrel can therefore only be used two or three times, which makes wine production much more expensive. If only new oak barrels are used for the ageing process, one speaks of "100%". At "50%" 50% is matured in new barrels and 50% in once used barrels. Afterwards the barrels are levelled (mixed). There is a range between "20%" and "100%". Some producers even expand in "200%" (e.g. Château Valandraud). This means that the wine is transferred from a new barrel to another new barrel. The extent or intensity of the "wood tone"(toast aroma) depends on the consumer taste, the trend is towards "less". The French oenologist Émile Peynaud (1912-2004) said: "One must use the wood in wines in the same way as the aromatic herbs in fine cuisine: it must bring out the other aromas even better"

Barrique ageing is mainly used for red wines, for white wines this is rather the exception. The wine is either filled into barrique barrels after fermentation in the fermentation tank and subsequent malolactic fermentation, or both fermentation processes can be carried out in barrique barrels and then transferred to other barriques for the ageing process(Barrique Passage). In any case, the red wines should be rich in tannins, extract and alcohol (ideally at least 12.5%) and of high quality with storage potential. Less or not suitable are wines that should show freshness and fruity, flowery aromas after aging. In the worst case, the aroma typical of the variety is completelymasked. This mainly concerns white bouquet varieties, especially Riesling. 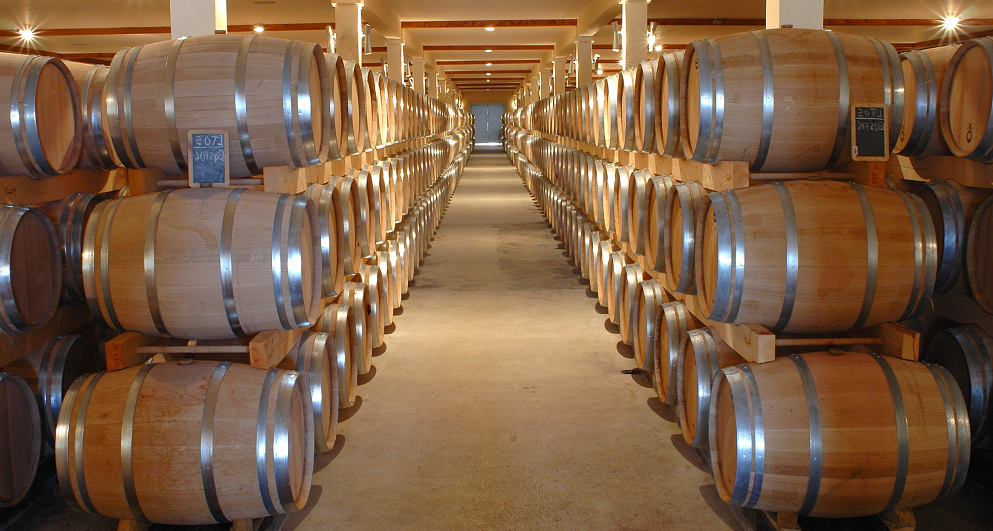 The red wine varieties Cabernet Franc, Cabernet Sauvignon, Merlot, Nebbiolo, Pinot Noir, Sangiovese, Syrah (Shiraz) and Tempranillo, as well as the white wine varieties Chardonnay, Macabeo, Sauvignon Blanc, Sémillon and Viognier are predestined for a barrique ageing. During barrel ageing, there is an interaction between the tannins contained in the wine and the aromatic substances of the oak wood such as eugenol, furfural, tannin, terpene and vanillin. Depending on the type of wood used, the way the staves are cut and, above all, the intensity of the toasting (barrel firing), this results in a typical flavour of caramel, coffee and toast; the wine undergoes significant sensory changes. With increasing age, this taste decreases again as the wine matures in the bottle or ages.

Barrique wines must absolutely undergo malolactic fermentation to break down malic acid. The storage time depends on the desired intensity of the wood tone, which depends largely on the age of the cask. Regular control by tasting is important because red wines tend to form acetic acid (see also under Acetobacter). During barrique ageing, which lasts at least 6, usually 12 to 24 months for red wines (but in extreme cases also longer up to 48 months), and usually less long for white wines, the wine is transferred to another barrel from time to time, carefully aerated and separated from the sediment (french lie). The ageing in barriques is complex and cost-intensive. A barrel costs between € 350 (American) and € 550 (French). Therefore, one tries different alternatives (see below).

In Germany and Austria, barrique ageing did not become popular until the early 1980s and was initially slow to gain acceptance. Especially in Germany this was initially associated with great problems, because wines matured in barriques did not comply with the provisions of the German wine law with regard to taste. For example, it was forbidden to pour wine into a container so that its odour and taste could be transferred to the product in a form that would give it its characteristic flavour (only permitted for the storage of spirits in oak barrels). For this reason, when the official test number was assigned in the course of quality wine tests, such wines were declassified as table wines. After initial reluctance, the quality control authority finally accepted "barrique wines" for testing under the pressure of practice. However, the legal basis for this method was still missing. When the conditions under which the designation "matured in barrique" is permitted were finally regulated in 1996, there is a factual legal situation which no longer makes the production and marketing objectionable.

In order to improve the image, special winegrowers' associations were founded, such as HADES (1986), Deutsches Barrique-Forum (1991) and Barrique Forum Pfalz (1993). In Austria there was a similar development. In the beginning the tasting commissions declassified the barrique wines as country wines or even table wines. In 1997 it was laid down by wine law that only quality wines (and only from 2018 on also country wines) may bear the designation "Barrique" or "matured in barrique" on the label if the sensory (organoleptic) examination showed that the wine has "acquired recognisable and harmonious flavours" by storage in oak barrels. However, this is hardly used any more. Whether a wine has been aged in barrique barrels can therefore only be recognised by its taste or price.

In Germany, the indication "Barrique" is only permitted for oak barrels up to a maximum volume of 350 litres; Austria has followed this wine law regulation. In descriptions, the terms small wooden barrel (barrique, with wood tone = toast aroma) and large wooden barrel (larger volumes, no wood tone) or similar are often used. Common texts are, whereby only the first one undoubtedly means barrique maturation:

Overseas, California was the first country where, from the 1970s onwards, large-scale attempts were made to produce Bordeaux-style red wines. This was done by imitating both the grape varieties used and the barrique ageing process, which was supported by French oenologists in an advisory capacity. One of the most famous examples is Opus One, created in 1979. From there, the process spread very quickly throughout the world and almost all the great red wines of the world are now aged in the small oak barrels in all renowned wine-growing countries. From the end of the 1990s, however, the trend went back in the other direction. This means that both the process itself can be understood on a smaller scale and the intensity on a larger scale. Particularly in Italy, Germany and Austria, efforts are increasingly being made to reduce the long storage times and to develop less tannin-emphasized oak barrels. Overseas, too, this is now becoming increasingly fashionable, which is declared "unwooded" on the label. Among consumers, there are more and more critics who reject excessive use and prefer to focus on fruity, varietal wines.

Alternatives to the barrel

As an alternative to the relatively expensive and time-consuming barrique maturing process using conventional barrique barrels, alternatives have been available in the New World for some time. These are wood chips (small pieces of oak wood) and staves (oak battens) as well as special square containers as an alternative to conventional barrique barrels under the brand names rebarriQue and Stakvat. The addition of aromatic oak wood essences to the wine is rather questionable. Within the EU, such techniques have so far only partly been permitted on an experimental basis by way of derogation. The trade agreement signed between the EU and the USA in 2005 resulted in a liberalisation (see Wine Act). Within the EU, the addition to wine of oenological tannins (in solid form) and, since 2007, wood chips has been permitted.

Extension of the useful life

There are various ways of extending the useful life of the product, which is usually only used three times. In the process, the barrels are "refreshed". In Austria the company Thonhauser offers a so-called reconditioning. The barrel is first cleaned with an alkaline solution and then rinsed with an acidic solution. The wooden walls are thereby cleaned of tartar, microorganisms are eliminated and the wooden pores are opened. In a process developed by Barreco, the barrels are milled out with a high-pressure water jet and re-toasted. Some barrel producers and joineries offer techniques to remove the used wooden surface and also re-toast the barrels. Another technique involves a combination of used barrique barrels and oak chips.

Through analyses and comparisons of all these very new procedures by means of tastings of the wines made with them in the course of research work at the Klosterneuburger Weinbauinstitut (Lower Austria), it was established that a restored barrel does not behave in the same way as a new barrel. So far, however, no significant differences in wine quality have been found. In any case, these new processes are clearly cheaper.

Lists of relevant keywords are listed under barrel, barrel and barrel types. Complete lists of the numerous vinification measures or cellar techniques, as well as the types of wine, sparkling wine and distillate are included under the keyword vinification. Comprehensive information on wine law can be found under the keyword wine law.