At the University of California in Davis (USA) a so-called "Aroma Wheel" was developed in the mid-1980s by Professor Ann C. Noble (*1935). She had discovered in the context of a sensory research project that there is no uniform terminology for the description of wines. The aim was to use the aroma wheel to create a generally understandable and usable term pattern with which the odour or aroma substances of a wine can be defined or described as unambiguously as possible in the context of wine evaluation or wine appeal. The aroma wheel is equally suitable for professionals and laymen.

The range does not contain any hedonistically judging or imprecise terms such as extraordinary, elegant, full-bodied, clean or similar, but only descriptions of odours that are generally known. The aroma wheel consists of three circles from inside to outside. The innermost circle contains 12 main groups, the middle circle 29 subgroups and the outer circle 94 individual aromas. You can, so to speak, start from the middle and taste your way out in three steps. The 12 main groups with examples are:

A special aroma wheel was later also created for sparkling wine. The Californian aroma wheel has established itself worldwide with country-specific adaptations. Similarly, a "mouthfeel wheel" was developed in Australia, which systematized tactile (concerning the sense of touch) and trigeminal impressions. Based on the Californian aroma wheel, the BDO (Bund Deutscher Önologen) has developed aroma wheels in a simplified form adapted to the conditions of German wines. There is one each for white wine and red wine. These can be obtained from the DWI (German Wine Institute). The aroma wheels are divided into seven main groups (segments) for the smell, as well as one for the taste impression.

The scent is first generally defined (inner circle) and then in a second step more precisely outlined (outer circle). For example, in the first step, under fruity you can smell that the wine smells like a berry. Then in the second step, by smelling more intensely, you can determine whether it is rather an elderberry or a currant or both. A special aroma wheel with different missing tones to identify wine faults was developed by the German wine journalist Laurentius Kollmann. In addition to aroma wheels, an aroma set for learning odours can be helpful, which is offered by the AROMASTER company for red and white wine, for example. Furthermore, this company offers a booklet with an aroma wheel for sommeliers as well as aroma wheels for the typical aromas of 20 grape varieties. 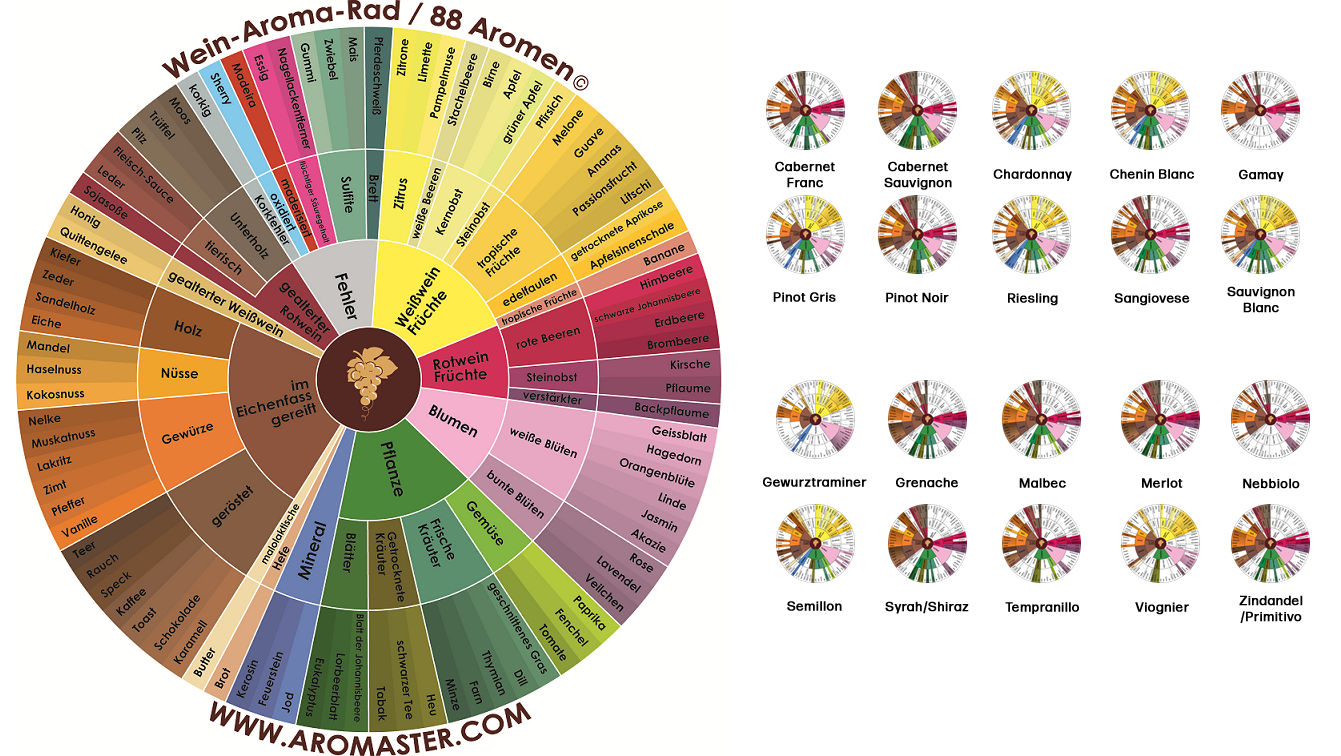 Pictures above: ©: German Wine Institute and Association of German Oenologists
Pictures below: © AROMASTER