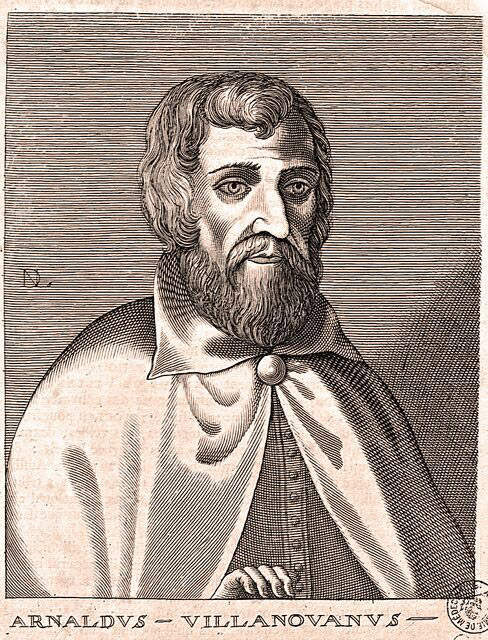 The famous scholastic doctor and scholar Arnaldus de Villanova, also known as Arnaud de Villeneuve or Arnold von Villanova (1240-1311), who came from Spain, taught as professor of medicine at the University of Montpellier in what is now Languedoc (France). He was one of the most influential and important physicians of his time and, as an alchemist, had a reputation as a gold-maker. His medical services were claimed by popes such as Boniface VIII. (1235-1303) and kings like Frederick II (1272-1337). When he travelled to Pope Clement V (around 1250-1314) on behalf of the latter, he died in a shipping accident. He was intensely occupied with the medicinal properties of wine and its positive effects on health. His work "Liber de Vinis", strongly influenced by the Greek physician Galen (129-216), deals exclusively with this subject.

He suggests especially spiced wines as medicine, for example ox tongue wine for curing the mentally ill and rosemary wine as an appetite enhancer, toothpaste, face beautifier and hair restorer. In addition, wine helps against melancholy, serves as a medicine for the liver, kidneys, urinary tract and veins, and provides relief from haemorrhoids and the cold in winter. Besides these sometimes abstruse claims, he also gives sound advice on how to make wine. For example, he describes how to improve dull, pale wines with a bad taste, explains how to peel them, warns against impure barrels and recommends proper grape ripening. He denounces wine adulteration:

Note that some wine merchants cheat, they make sour or bitter wines look sweet by mistakenly persuading the taster to eat licorice or nuts or old salty cheese first. You can protect yourself from this by tasting the wine in the morning after rinsing your mouth and eating three or four bites of bread dipped in water, because if you taste a wine on an empty or full stomach, you will find that your sense of taste is spoiled.

Villanova experimented with the production of brandy at the Templar vineyard near Perpignan in Roussillon around 1285. Following Arabic recipes, he distilled alcohol from wine. The "Aqua Vitae" (water of life = brandy) was one of Villanova's universal remedies. During his experiments he found out that by adding alcohol the fermentation is stopped and residual sugar is preserved in the wine (see under Sprites). In 1299 Villanova received a patent for production from the King of Mallorca. He reported that by drinking it every day he felt much younger. This was the birth of the Vin doux naturel. Villanova also discovered the toxicity of carbon monoxide and decomposing meat. Villanova was the first to describe the representation and behaviour of mineral acids towards metals. He was the author of numerous writings, such as the four-volume work "Handbuch der gesamten Medizin" (Breviarium practicae), as well as about 20 alchemical writings.