Wine adulteration, or colloquially also Panchen, is understood to mean deliberate and intentional manipulation of the wine making process that violates wine legislation and is carried out with deceptive or fraudulent intent. In doing so, the aim is to "improve" the taste or texture by means of prohibited additives, thus falsely pretending to have a certain or better quality, to increase the quantities of high-quality wines by mixing them with simple, cheaply produced bulk wine or simply by adding water, and to market wines under prestigious names or vintages by means of false labelling, even using real labels and/or bottles.

In the history of viticulture, there have always been different and often changing views on the question of what exactly is considered adulteration of wine. What today is considered as pancheking was perhaps a widely practiced practice just a few decades ago. Even today, some techniques are regulated differently from country to country and especially in Europe compared to the New World. Three significant examples are the regulations concerning enrichment, acidification and sweetening. The introduction of strict wine laws in many wine-growing countries starting at the end of the 19th century had a positive effect. For some wine-growing regions they already existed before that. However, it was of course not possible to prevent manipulations completely.

Introduction of designations of origin

Especially the 18th is considered the "century of wine scandals". The enormous demand in England for port wine led to bottlenecks from 1730 onwards. Therefore, simpler wines were mixed with alcohol, elderberry juice, ginger, pepper, cinnamon and sugar on the Douro. The positive effect was that in 1756 the port wine area was declared one of the first protected areas of origin and strict laws were passed. In Bordeaux, it was common practice on a large scale to blend the wines for the English market with strong, simple wines from other areas (Rhône, Spain). When there was a great shortage of wine in France due to phylloxera and mildew, raisin wine was produced in large quantities from 1880 onwards. In the 19th century there were large numbers of fakes of Hungarian Tokaj in many countries, and books even contained detailed recipes for it.

The great breakthrough in the fight against counterfeiting began with the definition of controlled designations of origin or provenance. These originated in France with the appellation system from the beginning of the 20th century. Of course, wine adulteration and panchetch continued to occur with increasingly sophisticated methods that were difficult to verify. For the counterfeiters also benefit from new scientific knowledge. A special form of fraud is to falsely market wines under a prestigious name or winery and/or special vintage. One motive is that very expensive wines are increasingly being used for capital investment, for which there is a market especially in Japan and Russia. Such buyers are willing to pay collector's prices at auctions.

The addition of water to wine for the purpose of wine propagation is the oldest and most common practice of adulteration. However, a distinction must be made between the production (where this clearly constitutes fraud) and the consumption of wine. In ancient times, mixing wine with water was common practice in order to minimize the alcohol content and was considered by the Greeks as a sign of cultivated moderation (see Satyricon). Until the late Middle Ages, pure water could hardly be drunk unboiled, especially in the cities, due to the largely existing contamination of wells and springs by sewage. Wine mixed with water was therefore also for hygienic reasons an everyday drink that was drunk in large quantities. The biggest problem was the shelf life, so attempts were made to preserve and flavour the wine by adding various ingredients such as distillates, spices, resin and herbal essences.

Already the Greeks in pre-Christian antiquity knew the preservative effect of sulphur, but as late as the 15th century the addition was forbidden and severely punished in case of violation. The most common manipulation techniques have always been to "improve" the acidity, sweetness and colour of the wine. A wide variety of substances such as lime, lead acetate, grape must, cattle blood, salt and sugar were used for this purpose. The clergyman Johann Rasch (1540-1612) already gave advice in the "Weinbuch: Von Baw, Pfleg und Brauch des Weins", published in 1580, on how to detect wine forgery such as the addition of water. 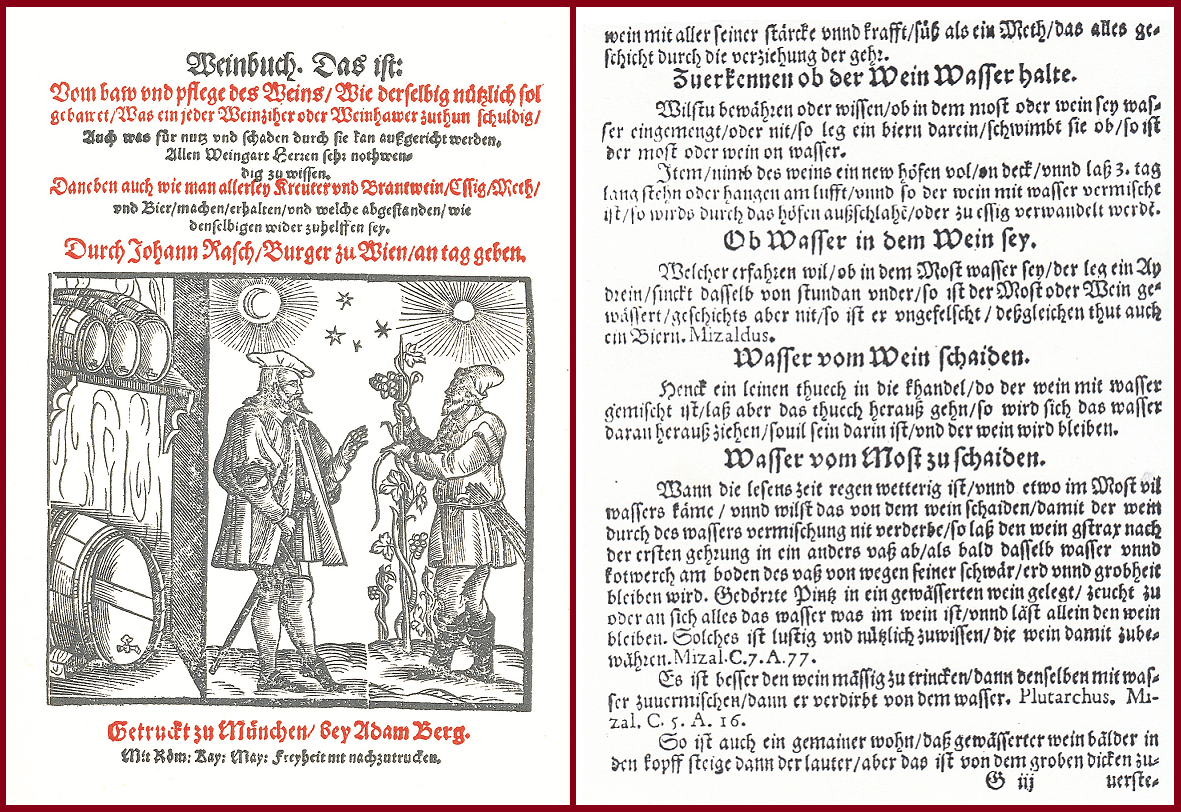 Even in ancient Rome it was customary to give out simple wine from other areas as prestigious Falerno wine. Today, wines are bottled in original bottles with original labels, as the profit margin is very high even for small quantities of counterfeit wine. With today's means, however, it is relatively easy to produce deceptively genuine labels (scanning the original and changing the vintage). When using real bottles and labels, even a newly developed method does not help to determine the age of bottle glass. However, it will help if no original bottle but only original labels are used.

The most common counterfeiting practices are new production, label fraud and refilling. Reproduction means that the wine, bottle, cork, capsule and label have been newly produced and nothing is original. It also happens that sometimes genuine bottles, capsules or labels are used.

With the label swindle, a weaker vintage is made into a special vintage by simply changing the label (happened, for example, with a Château Lafite-Rothschild 1991, which mutated into a vintage 1982). Older vintages are often re-labelled with the label of the first wine for wines from lesser known wineries of a great vintage or the second wines of famous châteaux. In this case, the capsule, the bottle is from the period of the wine mentioned on the label, also the soiling, the vintage brand and the age of the cork match the original.

When refilling, a lower quality wine is filled into the original bottle. A cork can be pulled out of the bottle undamaged using special bottle openers. There is already a market for bottle utensils of prominent wines. New capsules can be bought on the Internet. Empty bottles of e.g. Château Lafite-Rothschild are paid up to $ 500 in China and are resold with dubious contents.

The shape of the bottle (the neck of old bottles is often conical, the seam indicates mechanical production), the bottom of the bottle (in the mid-1990s, a hole was drilled in the bottom of the bottle with a microscopic drill, and the wine was emptied by means of a pump, then filled up with new other wine and the bottle is sealed with special glass glue), the nature of the glass, the filling level (which refers to the age), the colour of the bottle (certain wineries use certain colours and shapes), the label and the condition of the cork a role The challenge is to examine the wine without opening the bottle. To do this, the cork is pierced with a thin needle and a small amount of wine is removed. Traces of radioactivity may indicate, for example, that the wine was made after the atomic bombs were dropped on Hiroshima and Nagasaki in 1945.

In France, a procedure has been developed to check the authenticity of old wine bottles. Scientists from the "Régional de Caractérisation par Analyse Nucléaire Elémentaire" announced in autumn 2008 that the origin and age of bottle glass can be determined using high-energy ions. 160 older rarities of the well-known London trading house Antique Wine Company were analysed. This company now offers the testing of old bottles as a service in cooperation with the university.

DNA analyses are increasingly being developed for the detection of illicit practices. INRA researchers made a breakthrough in 2002 by developing the Nuclear Magnetic Resonance analysis method. This can be used to determine whether aromatic substances have been added to a wine. As a measure against manipulation, Ornellaia used the RFID system for the first time. A new analysis method called metabolomics was tested at the Max Planck Institute. The relative density measurement plays an important role in the allocation of the official test number (Germany) and the national test number (Austria) with regard to possible wine manipulation.

A comprehensive diploma thesis was published in June 2008 under the title "Wine Counterfeiting - Guidelines for the recognition of wine plagiarism" by Thomas Breitwieser. He runs the website "Lust auf Wein". Certain contents of the diploma thesis were also used as source.

The most spectacular wine forgeries of modern times are listed under Wine Scandal and under Hardy Rodenstock and Rudy Kurniawan. The question as to which methods or use of certain agents are to be considered as wine adulteration gained explosive topicality due to the wine trade agreement between the USA and the European Union, which came into force in 2006. Comprehensive information on this issue can be found under the keyword Wine Law. A complete list of the numerous vinification measures and cellar techniques, as well as the types of wine, sparkling wine and distillate regulated by wine law can be found under vinification.