The US wine-growing pioneer John Adlum (1759-1836) is regarded as "the father of American viticulture". After a military career in the War of Independence, he became a surveyor and in 1814 moved with his family to the federal district of Washington, DC. Two years later, he bought land in what is now the Northwest residential area of Cleveland Park and began to grow wine. He first tried to grow vines from Europe, but they succumbed to diseases such as mildew and phylloxera. Around 1820 he got the historical variety Catawba, which he later named after himself, from a family Scholl in the US state of Maryland. The vine had arrived there from North Carolina several years earlier. The Scholl family claimed that the variety was a Tokaj vine from Hungary. Adlum planted it on 200 acres at his vineyard "The Vineyard". He later stated that it could by no means be a Tokaj vine. 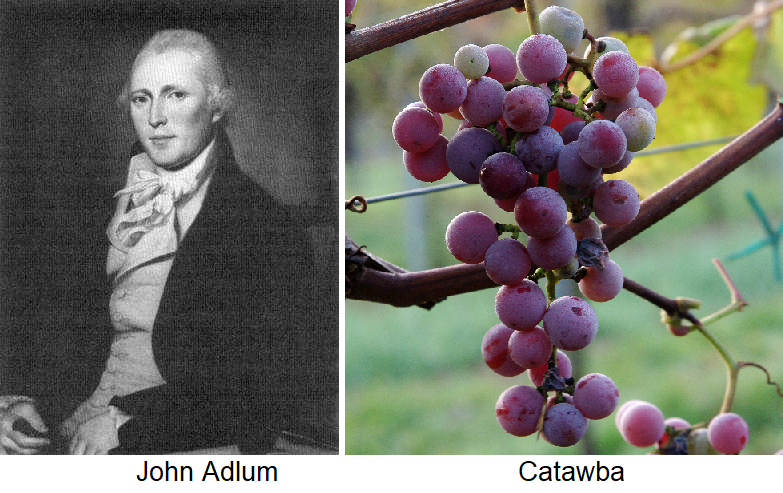 In 1823, Adlum sent a wine made from it to the then 80-year-old former US President Thomas Jefferson (1743-1826), who had acquired extensive knowledge of wine during his years as US ambassador to France and had grown his own wine in Virginia with his Monticello vineyard. Jefferson praised the wine and compared it with a Burgundy Chambertin. But he advised Adlum to stick to native varieties, "because European vines would take centuries to adapt to the American climate and pests". In 1825, the lawyer and US wine pioneer Nicholas Longworth (1783-1863) received catawba cuttings from John Adlum, cultivated them on a large scale on his land near Cincinnati on the Ohio River and pressed them into sparkling wine.